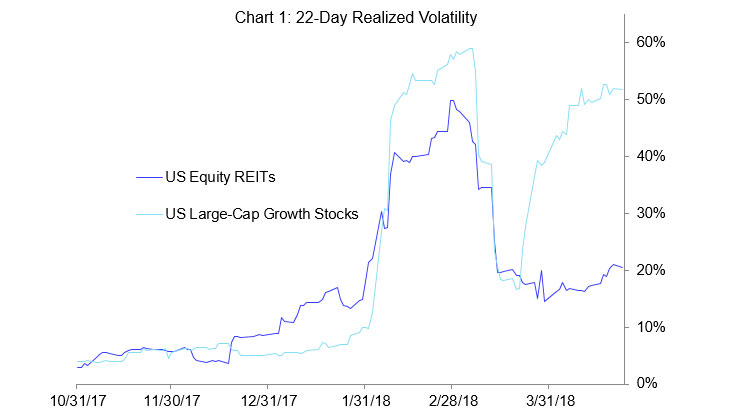 Lots of people noticed the jump in market volatility that followed immediately on the heels of the jobs report published on Friday, February 2: large-cap stock prices dropped more than two percent on the day of the report, and another four percent the following Monday. From February 2 through March 1, large-cap stocks swung up or down by more than one percent on 13 separate days, compared to only six days when they moved by less than one percent. REIT returns weren’t as severely affected as non-REIT stock returns—for example, REITs lost less than half as much as the broad market on February 2, and saw only nine large-swing days over the full month—but REIT volatility nevertheless went up with market-wide volatility. After the turbulent March was over, REIT volatility came down with market-wide volatility, too.

And then something surprising happened: stock market volatility—especially the volatility of large-cap “growth” stocks—spiked again in late March, and remained high during April; REIT volatility, though, did not.

Chart 1 shows a widely used measure of short-term market fluctuations called “realized volatility,” computed as the sum of squared daily market movements over a chosen period—in this case, the trailing 22 days (the average number of market days in a month). During 2017 realized volatility was abnormally low, especially for large-cap growth stocks: the median 22-day realized volatility for the Russell 1000 Growth index (R1000G) has been 16.2 percent since the beginning of 1991, but was just 4.5 percent during 2017. Volatility was relatively low for REITs, too, with a median value of 7.9 percent during 2017 compared to 11.3 percent going back to the beginning of 1991. During the February turmoil the 22-day realized volatility for large-cap stocks climbed as high as 59 percent (REITs nearly hit 50 percent) before dropping back down to 17 percent—still slightly above normal by historic standards—in mid-March. Starting in late March, however, non-REIT stock volatility jumped back to the 50 percent mark, where it has generally remained—while REIT volatility stayed in a close-to-normal range of 15 to 20 percent.

It’s worthwhile pausing to recall what we mean when we talk about “growth” stocks. “Growth” stocks are not defined as stocks whose returns can be expected to grow strongly—indeed, the groundbreaking research done by the renowned Fama & French team shows that the long-term returns of “growth” stocks have been disappointing relative to the returns of their opposites, which are called “value” stocks. Instead, “growth” stocks are companies whose stock prices are inflated relative to their actual earnings (or other measures of operating performance)—in short, companies whose stock prices don’t make any sense unless their earnings will “grow” very rapidly. Unfortunately, typically they don’t—and, as a result, their overly-optimistic stockholders have generally realized relatively poor long-term returns from “growth” stocks.

Another thing to keep in mind about “growth” stocks is that they tend to be more volatile than their “value” counterparts. For example, the annualized volatility of monthly returns for the R1000G since the beginning of 1979 has been 16.8 percent, compared to just 14.4 percent for the Russell 1000 Value index (R1000V). Investors generally should insist on higher returns to compensate them for higher volatility. “Growth” stock investors, though, have actually realized lower returns and higher volatility: for example, the total return of the R1000G over the same period has averaged just 11.36 percent per year compared to 12.06 percent per year for the R1000V.

To summarize, “growth” stocks are basically defined by the fact that investors get too optimistic about their future earnings prospects, and as a result drive their stock prices to over-inflated levels. Because actual earnings tend not to live up to their inflated expectations, “growth” stock investors generally end up disappointed with their long-term earnings.

Now let’s re-examine the current market situation. For well over a year now, disappointing REIT returns have been blamed on expectations for rising interest rates, and short-term increases in REIT volatility have been blamed on uncertainty regarding the timing and magnitude of interest-rate changes. I just don’t buy it, and I think the recent performance discrepancy between large-cap stocks and REITs supports an alternative explanation.

Volatility is a measure of uncertainty: when investors have widely varying opinions as to the values of their assets, transaction prices tend to fluctuate rapidly as some investors become willing to sell at relatively low values while others become willing to buy at relatively high values. Remember how “growth” stocks are generally more volatile than their “value” stock counterparts? That’s because what defines them as “growth” stocks essentially comes down to the discrepancy between projected earnings and actual earnings. In contrast, what prevents “value” stock prices from becoming similarly over-inflated is that their projected earnings generally don’t outpace their actual earnings.

So, what accounted for the surge in uncertainty regarding small-cap stock values in late March and April, a time when there was no corresponding surge in uncertainty regarding REIT values? And, in particular, what accounted for the fact that REITs outperformed large-cap stocks by nearly five percentage points over that two-month period? I don’t think it’s uncertainty about interest rates. I think it’s uncertainty about whether optimism regarding earnings growth can no longer support inflated stock valuations—in short, I think it’s concern that “the new tech bubble” may finally be ready to burst.

Pull out your history textbooks and review what happened to the stock market in the late 1990s. From the end of 1997 through March 2000 large-cap growth stocks (the R1000G) gained 60 percent in what we now know was “the tech bubble.” That surge was profitable for the tech company entrepreneurs, but latecomers had to come up with the cash to buy in at prices that had become inflated thanks to overly optimistic projections of future earnings. Where did the cash come from? They sold other assets: REIT total returns, for example, went down by nearly 20 percent over the same period, despite the fact that real estate operating fundamentals remained strong.

While large-cap growth stock returns were stunningly high, so was their volatility: the median 22-day realized volatility during that same period of 2¼ years (end of 1997 through March 2000) was 38 percent, and it actually touched as high as 196 percent owing to a series of alternating big-gain and big-loss days. That’s what happens when investors start to become uncertain as to whether their optimistic earnings projections will hold true. REIT volatility, meanwhile, remained relatively staid with a median value of just 5.8 percent.

I probably don’t have to tell you what happened next to tech stocks: from March 2000 to August 2000 investors struggled to maintain the inflated stock prices of large-cap “growth” companies—and after August 2000 the growth prospects finally collapsed, with the R1000G losing a spectacular 44 percent before finally bottoming in September 2002. You may not remember, though, just how much better off REIT investors were: from March 2000 through September 2002 REIT total returns averaged 45 percent, outperforming large-cap growth stocks by nearly 90 percent.

I also probably don’t have to tell you that I’m concerned by the parallels between the late 1990s and today. REIT returns—now as then—have been disappointing despite the fact that real estate operating fundamentals have remained quite strong. Large-cap growth stocks, especially tech stocks—now as then—have seen their stock prices driven to uncomfortably high levels by extraordinarily optimistic projections of future earnings. The REIT underperformance—now as then—seems to have been driven by the desire of many investors to cash out of “value” stocks so they could sink their capital into so-called “growth” stocks even at inflated prices. Large-cap growth stocks—now as then—have seen a surge in volatility driven by growing uncertainty as to whether their earnings projections were realistic. REITs—now as then—have seen their stock prices remain relatively steady, patiently waiting for investors to wrest their attention away from the bright lights and recognize the value that has always been there in REITs.

I certainly don’t hope for a large-cap growth stock decline anything like the tech stock meltdown of 2000-2001, but I do worry about it. The big volatility disconnect between REITs and the R1000G over the last several weeks makes me wonder whether the optimistic investors who’ve been propping up the large-cap growth part of the market may finally be worrying about it themselves.