The Plunge in GDP was Deep, but not so Broad

The economy shrank more rapidly in the second quarter than at any other time since careful statistical recordkeeping began in the late 1940s, with real GDP declining at an annualized rate of 32.9%. While the decline was deeper than anything preceding it, though, it wasn’t so broad. A few areas—travel, hotels, restaurants and bars, other recreation—were responsible for over a third of the overall decline, yet these categories represent just 6% of the overall U.S. economy.

Activity in these areas fell 35% to 50% in the second quarter, NOT annualized, which corresponds to declines of 80% to 90% at an annual rate. The close interaction of customers and employees in these service sectors suggests that there will be a slow recovery of these categories, at least until an effective vaccine becomes widely available. 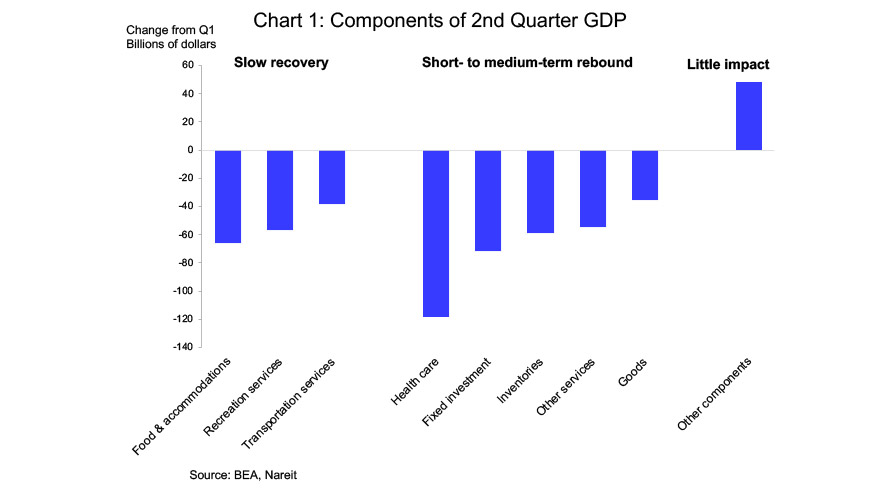 There were declines elsewhere, but the pace of contraction was more muted. Consumer spending outside of the travel, meals and recreation was 5.9% below the first quarter level, or a 21.7% annualized decline. That is still a significant decline, of course, but many types of activity can reasonably be expected to return to pre-crisis levels fairly quickly, once the virus is better contained.

For example, a decline in health care services—dentists’ and doctor’s visits, elective surgery—accounted for nearly one-third the total decline in GDP in the second quarter. Most health care has been postponed rather than canceled, and is likely to experience a full recovery.

Health care and other types of spending will likely have a short- to medium-term rebound. Some, including consumer spending on items like clothing, footwear and gasoline, could recover in line with the economic reopening. Others, including construction of both homes and commercial buildings, and business investment in plant and equipment, may take a few months to return to pre-crisis levels.

The sectors that registered moderate declines in activity and are also likely to recover over the near- to medium-term are roughly half of the overall economy and accounted for three-quarters the decline in the second quarter. And some sectors had little impact from the pandemic, or even registered increases in the second quarter, including government spending, which rose due to fiscal stimulus programs.

The trends within the second quarter reinforce the message of stronger activity in the second half of the year. Consumer spending reached bottom in April, and during May and June rose 8.5% and 5.2%, respectively, recovering nearly two-thirds of the decline that occurred when the stay-at-home orders began. Further gains will depend on better progress in addressing the COVID-19 pandemic, but recent experience demonstrates that economic activity can recover surprisingly quickly as lockdowns and other restrictions are eased. 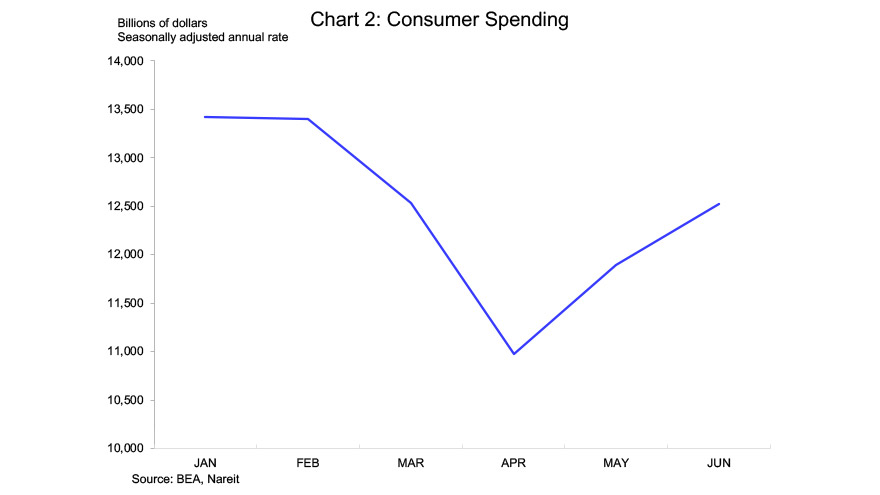 REITs and commercial real estate markets are closely tied to the broader economy. The plunge in economic activity during the spring caused record numbers of layoffs and loss of income, which has hurt demand for most types of real estate (although several REIT sectors, including data centers, infrastructure, and industrial, help support ecommerce and the digital economy, and have benefitted from stronger demand during the pandemic). Early signs of a macroeconomic recovery, with many sectors likely to reverse most or all of their recent declines, will help support the outlook for commercial real estate.