What Accounts for REITs’ Relative Performance vs S&P 500 During the Recent Stock Market Turbulence?

The total return on listed Equity REITs since stock market volatility spiked higher last August is 500 bps higher than the total return on the S&P 500. Moreover, REITs performed better than seven of the 10 headline Sectors according to the S&P/MSCI Global Industry Classification System (GICS®) (See chart below and column 1 of table). 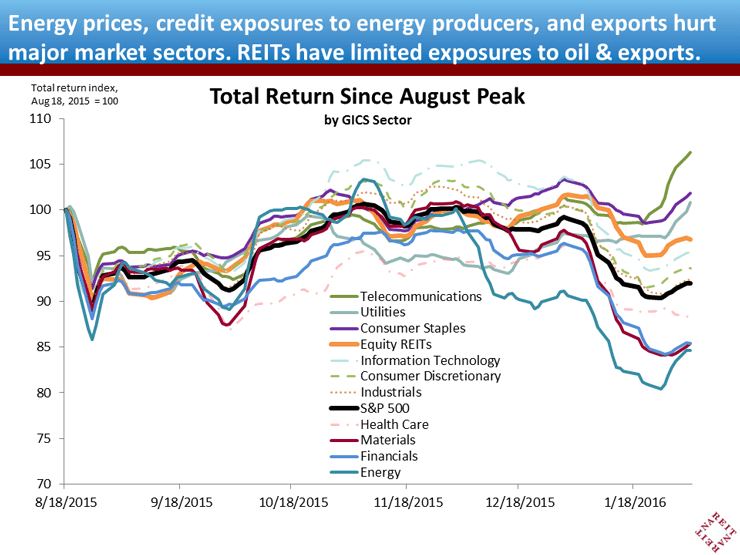 What accounts for REITs’ relative performance during this period of market turbulence?

GICS will increase the number of headline Sectors at the end of August, 2016, to include Real Estate as an 11th headline Sector.* The divergent trends of major market sectors since last August, and the performance of Equity REITs exceeding seven of the 10 current GICS sectors, underscore the importance of holding a diversified portfolio across all asset classes, including listed equity real estate, in order to potentially reduce the volatility of overall portfolio returns.

U.S. equity markets plunged 11% over five trading days from August 18th through August 25th. The chart nearby plots the level of the S&P 500 total return index, as well as all 10 headline Sectors according to GICS. The FTSE-NAREIT All Equity REIT Total Return Index is included as well. All Sectors are indexed to equal 100 on August 18th.

The initial decline was strikingly similar across all sectors, as fear and uncertainty about risks to the economic outlook were broadly felt, at least initially. Most Sectors posted double-digit declines, and every Sector fell at least 8% (column 2 of table). 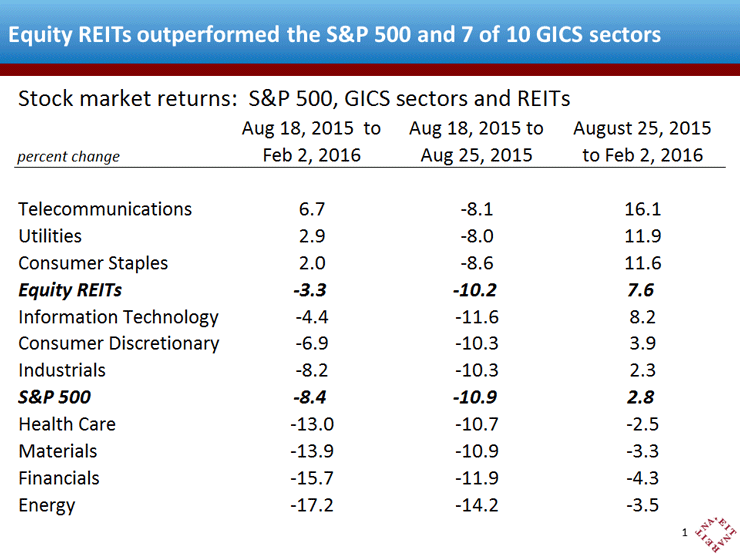 There are a variety of economic fundamentals that affect these sectors differently, however, and equity market returns have diverged widely since the low point last August. Three sectors—telecommunications, utilities and consumer staples—staged double-digit rebounds, and by early February stood above their August levels (column 3 of table, and top three lines along the right side of the chart). Other Sectors, however, continued to move down, and by early February, health care, materials, financials and energy stocks were all below the bottoms reached last August. The spread between the top-performing and bottom-performing sector over this period was nearly 24 percentage points.