What’s Ahead for Commercial Real Estate and REITs During the Economy’s Reopening 2.0?

The pandemic appears to be at a major turning point as vaccine production and distribution have hit stride. The economy will reach a major turning point soon afterwards, which will raise several issues for real estate and REITs. The outlook remains favorable, especially as demand rebounds in areas like lodging/resorts and retail.

It will only be after the initial rebound of the reopening, however, that we will see whether longer-term structural changes have an impact on CRE, including brick-and-mortar retail as e-commerce grows, how office markets adapt to WFH in the aftermath of the pandemic, and whether moves from dense downtown areas to suburbs and smaller cities continue to affect apartment and housing markets. The digital economy, meanwhile, is likely to continue its expanded role in activities of U.S. households and businesses, providing secular tailwinds for data centers, cell phone towers, and industrial/logistics REITs.

How COVID-19 has Affected Commercial Real Estate and REITs

Since last summer I have advised not to pay attention to the usual high-frequency economic indicators (labor markets, retail sales, business investment) as the economy would not be able to reopen fully until the pandemic had been brought under control. There were efforts to reopen parts of the economy last summer in an environment with 50,000 or more new cases of COVID-19 per day. These failed, unfortunately, and there were several setbacks along the way, especially as COVID-19 cases surged to 200,000 to 250,000 per day in the fall and winter.

Now the pace of infections has slowed dramatically, although health officials warn it is still dangerously high. If the vaccine rollout proceeds along its current path and barring any unforeseen reversals, the pace of new cases will likely slow further and hospitalizations and deaths will continue to decline. As this occurs, the economy will begin Reopening 2.0.

Key Developments to Look for in the Economy, Commercial Real Estate, and REITs

Jobs first. There was a burst of job growth last spring after the initial lockdowns were relaxed. These job gains slowed over last summer and fall, however, as many parts of the U.S. economy continued to operate well below potential during the stay-at-home economy.

Reopening 2.0 is likely to enjoy another surge in employment. Total payrolls are roughly 10 million below pre-pandemic levels, with sectors like hotels and travel, restaurants and bars and entertainment still most affected. This reopening has no precedent and we cannot gauge accurately how rapidly it will proceed, but monthly job gains of 500,000 to 1 million over the summer and fall would not be surprising. 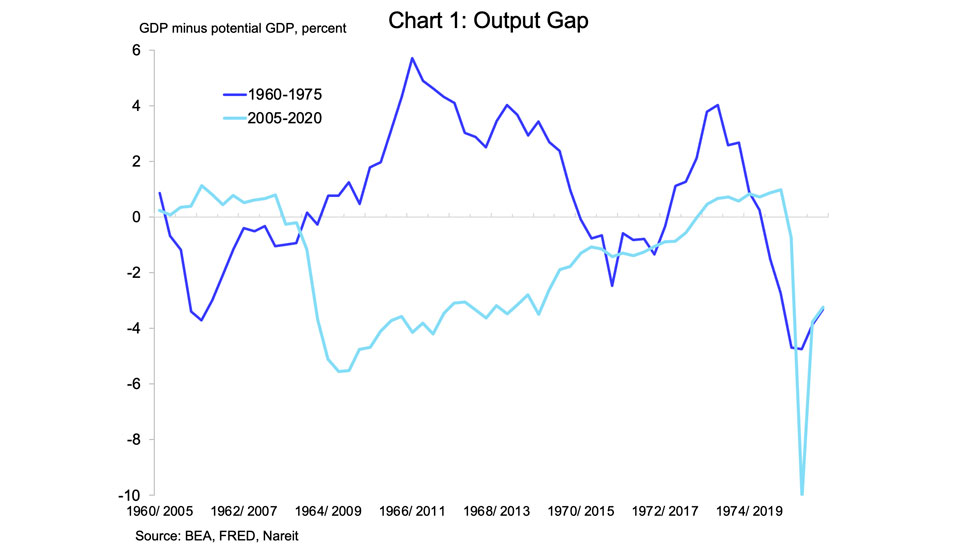 Rapid job growth may prompt warnings about inflation pressures as the economy gets back to its full potential. These fears are overstated, however, as a review of the rise in inflation in the 1960s can demonstrate. During the 1960s, the economy exceeded potential (was “running hot”) for more than half a decade, and at times was 6% above potential. Economic theory anticipates that periods when GDP exceeds potential can lead to scarcity and bottlenecks, causing rising prices and accelerating inflation. Indeed, after this extended period when GDP was above potential, inflation began to rise in the late 1960s.

Over the past 15 years, in contrast, economic slack, not running hot, has been the norm. The economy has been below potential more than two-thirds of the time over this period, in 2009 and again last year, it was more than 5% below potential. Unemployment remains elevated in early 2021, factory capacity utilization is below long-term averages, and there have been few signs of price pressures outside of food and energy commodities. History shows that it often takes a number of years for economic growth to reduce or eliminate slack, suggesting that any potential inflation pressures due to the economy running hot remain far in the future. 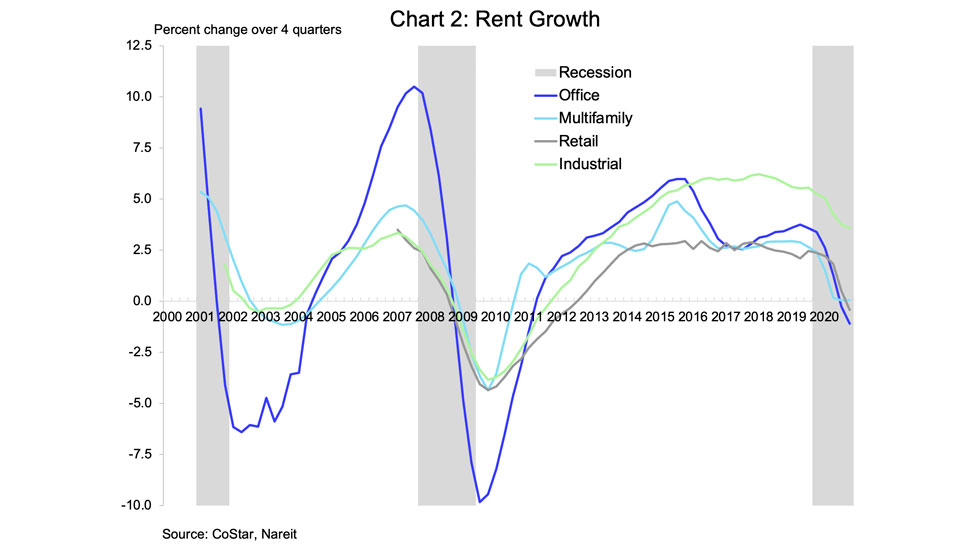 Business demand and commercial real estate will follow. Businesses will need more than just workers; look for a pickup in all types of business activity, including orders for durable goods, industrial production, and demand for commercial real estate. CRE markets typically bottom out after the rest of the economy as businesses usually have a bit of slack in their current space. I expect a turn towards positive growth in new leases in coming months and a slowing of the rise in vacancy rates in the second half of the year, topping out around early 2022. Rent growth will likely follow a similar time frame.

Longer-term impacts of the pandemic will only surface after this initial wave of recovery is largely complete. The structural fundamentals of the U.S. economy and of commercial real estate markets were sound prior to the onset of COVID-19, which will smooth the way for these early stages of recovery. The deep recession has caused untold damage, however, in the form of business bankruptcies, long-term unemployment, and household balance sheets. It will be important to be alert to signs that some jobs and some businesses may not come back quickly, or not come back at all, even as most of the economy recovers rapidly.

REIT Sectors to Watch During the Recovery

Potential longer-term changes to commercial real estate markets may also become clearer during a third phase. I will be watching four areas closely: 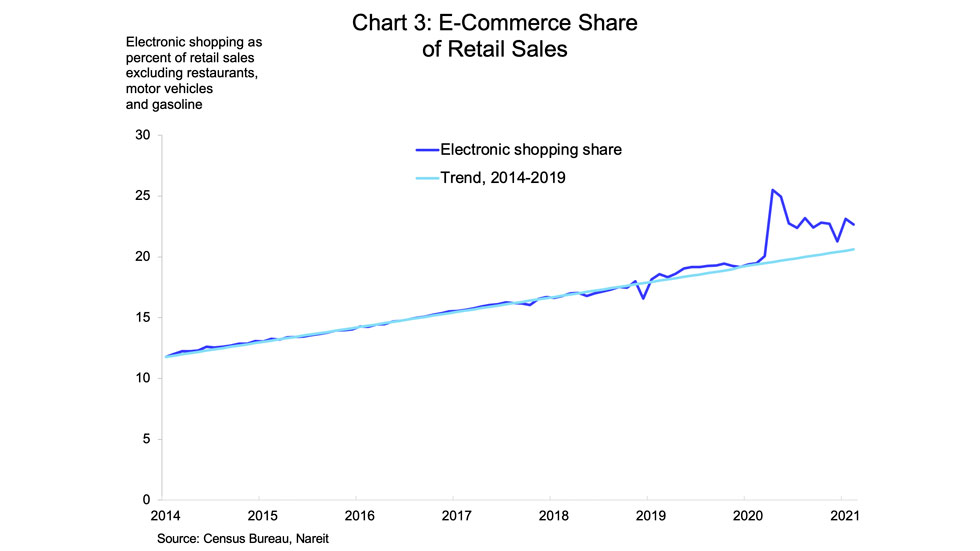 1) Retail property sector. As shoppers return to restaurants, stores and malls as COVID-19 infections ebb, will there be a wave of stores reopening and new shops moving in to take the place of others that failed? Brick-and-mortar retail sales have been robust over the past ten months, as the e-commerce share of sales has moved back towards its long-term trend (see my recent column on Forbes.com for further discussion brick-and-mortar retail and the longer-term competition with the e-commerce sales channel). A critical question for the retail property market is whether the tenants’ recovery translates into rising occupancy, rents, and property prices;

2) Office markets. How many employees will return to the office and for how many days a week? Employers have expressed interest in a wide variety of possible working arrangements, ranging from extensive permanent work-from-home (WFH) arrangements, to a full return to the office, and other flexible arrangements between these two ends of the spectrum. It may be several years before a stable new model for office work emerges. I expect flexible WFH to remain a prominent part of most work environments, but for many workers and employers the most important tasks will once again take place in the offices and conference rooms. Keep an eye out for major employers announcing back-to-the-office plans;

3) Residential markets. The pandemic saw many households move from dense environments in or near downtown areas to places in farther-out suburbs or smaller, less expensive cities. This migration was fueled by a desire to avoid density and facilitated by reduced commuting (or eliminated commuting) with WFH. How many of these households move back to the cities, or are replaced by a younger cohort attracted by increased availability and cheaper rents?

4) Digital economy real estate. Many types of household and business activities shifted into the digital realm during the pandemic, from online purchases and deliveries of goods to electronic conferences and business meetings. REIT sectors supporting the digital economy—data centers (which hold servers that host internet sites, and store and process digital information), infrastructure (largely comprised of cell towers that transmit both voice and data communications), and industrial (which own and operate logistics facilities for the delivery of goods)—enjoyed a surge in demand. Many of these changes, however, save time and money and are more convenient that in-person transactions, and are likely to remain after the pandemic. Will these digital economy real estate sectors continue their robust growth in the years following the pandemic?