What’s the Yield Curve Telling Us About the Outlook for the Economy and REITs?

Interest rates remain in the headlines, and given their importance in the U.S. economy, it’s smart to pay attention to what they may (or may not) be telling us. Two developments in particular are noteworthy. First, the yield on the 10-year Treasury note touched 3 percent for the first time since 2014. Second, short-term interest rates have been rising more rapidly than long-term yields, resulting in a flatter yield curve. Should this trend continue, the yield curve could invert—that is, short rates rise above long rates.

What are rising rates, and the possibility of an inverted yield curve, signaling about the outlook for the economy and for REITs? Despite some of the recent headlines, these are normal developments in an economic expansion and reaffirm our views that the economy and the REIT sector are on steady ground.

The first issue is easy to handle. Even at 3 percent, long-term interest rates remain low by any measure, and are moving from an unusually low level to a range more consistent with a normal economic expansion. Several factors that contributed to the decline in long-term rates during and after the Great Financial Crisis (GFC) are now reversing, so it’s only natural for rates to reverse their decline as well.

For one thing, global economic growth was extremely weak in the aftermath of the GFC, which reduced borrowing needs and encouraged a “flight to quality” that benefited Treasury securities. Global growth has (finally) gained speed. Higher interest rates that are due to stronger economic growth are nearly always positive for financial markets, and also for real estate and REITs. 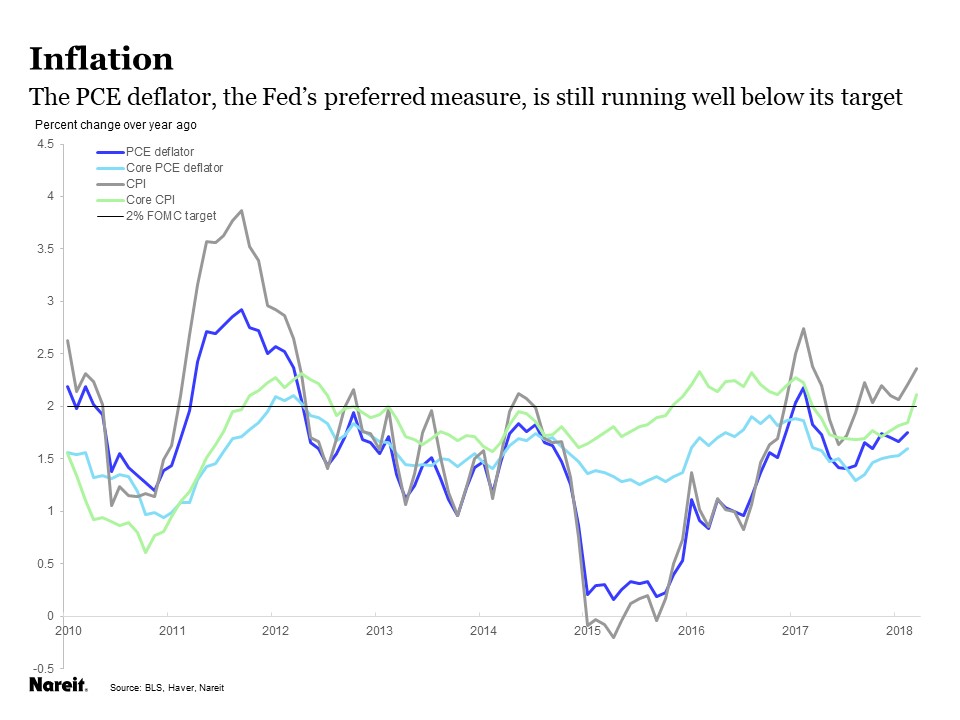 This more robust growth has allowed the Federal Reserve to begin reducing its holdings of long-term Treasury securities and MBS. The decline in the Fed’s portfolio puts some upward pressure on interest rates, as it reduces the net demand for Treasuries. Again, this is not alarming, as it is a return to a more normal monetary policy stance. Rising commodity prices and concerns about higher inflation are also pushing interest rates higher. The actual trends in inflation, however, are benign; the PCE deflator, the Fed’s preferred measure of inflation (it has fewer measurement issues than the CPI and is considered a more reliable gauge of inflation), continues to run well below its 2 percent target (dark blue line, chart above). 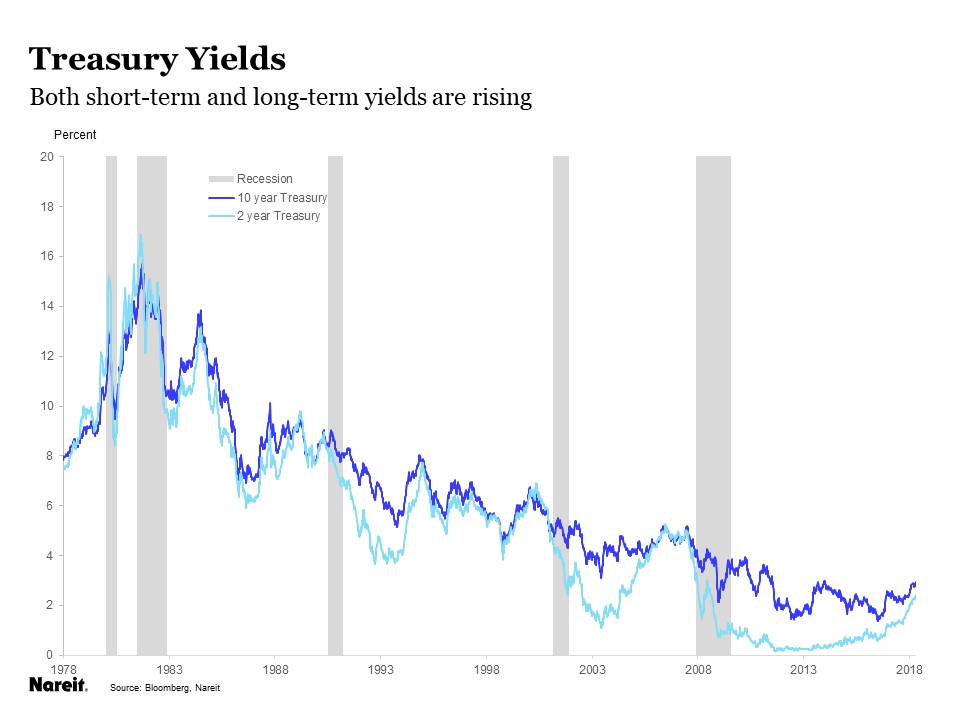 The flattening yield curve, and possibility that it may invert, has recalled echoes of the history of the yield curve inverting prior to recessions. Short-term rates have risen nearly twice as much over the past year as have long rates, with a 130 bp increase in the yield on the 2-year Treasury note compared to a 75 bp increase in the 10-year yield. This has narrowed the gap between the 10- and 2-year yields to 50 bps, compared to over 100 bps a year ago. 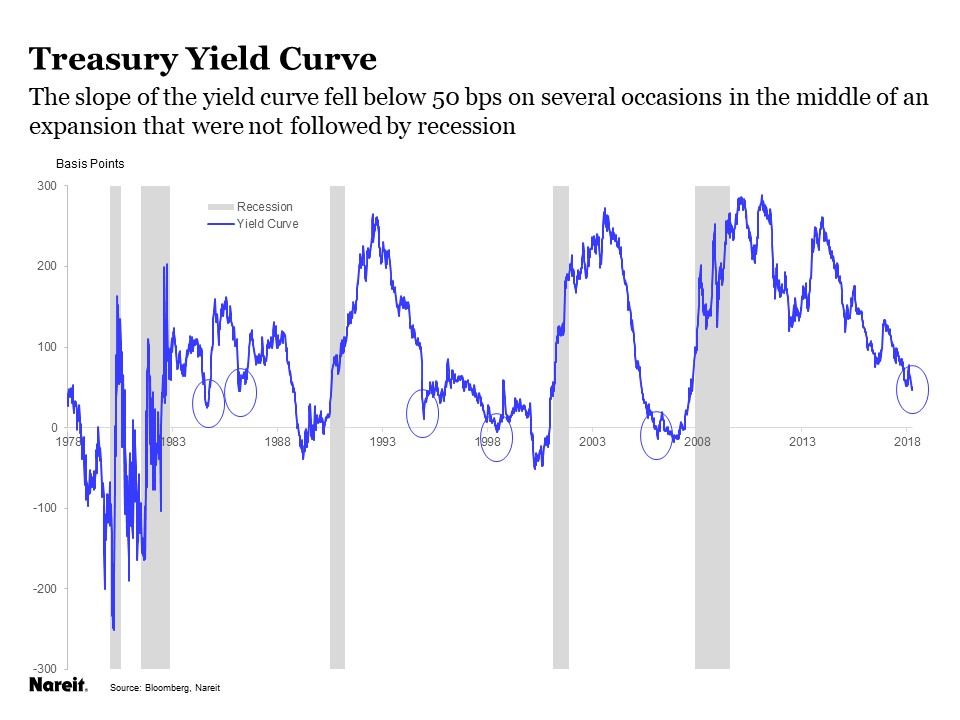 It’s important to note that a flattening or inverting yield curve may not be the cause of economic weakness, but rather the symptom of a slowing economy. For example, the yield curve inverted in 2000 as long-term rates fell 60 bps in an economy that was already weakening before heading into the 2001 recession. In this instance, citing the inverted yield curve as a leading indicator is confusing cause and effect. Indeed, recent trends in economic activity and job growth do not signal that the economy has begun slowing today as it had in 2000.

Financing conditions in real estate markets are quite attractive with Treasury yields and mortgage rates still at the low end of the historical spectrum. REITs are well positioned for the interest rate environment ahead, as they have reduced their leverage and locked in low interest rates for many years into the future (see my recent Market Commentary on interest rate exposures of REITs). And the flatter yield curve is consistent with the type of mid-expansion financial conditions that have fostered long real estate expansions in the past.