Why Have REITs Underperformed the Stock Market Recently?

Over the first six months of 2017 the broad U.S. stock market had outperformed the REIT market, with the Russell 3000 Index showing total returns of 8.93% compared to just 5.43% for the FTSE NAREIT All REIT Index.  Several market observers have raised the question why investors seem to like non-REIT stocks more than REITs.  Dig just a little deeper, though, and this turns out not to be a “stocks vs REITs” story at all. 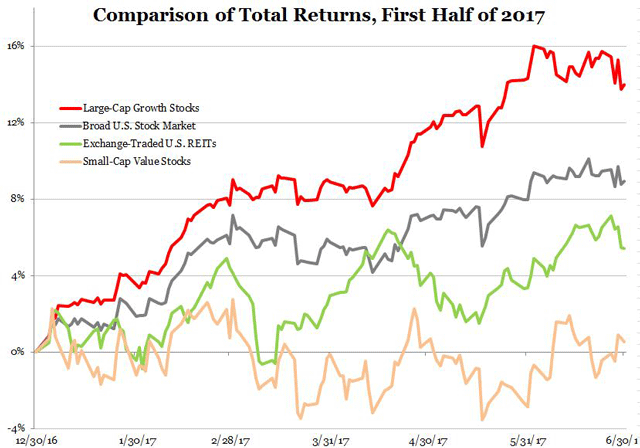 The first thing to notice is that this has been a growth rally, not a value rally.  Growth stocks are not defined as “companies whose returns will grow strongly”—rather, they may be companies whose stock prices are already high relative to any of various measures of earnings (for example, they may have high P/E ratios, or high stock prices relative to the book value of their assets) or simply companies that have grown strongly over the past several years.  In fact, long-term data (the famous Fama-French research) show that the total returns of so-called “growth stocks” have generally been lower than for other stocks.  The reason they’re called “growth stocks” is just this: the only way their current stock prices make sense is to imagine that investors expect their earnings to grow strongly in the future, thereby justifying their already-high stock prices.

In contrast, “value stocks” are companies whose stock prices are currently low relative to the various measures of earnings, including those with low P/E ratios.  In this case the terminology is more descriptive: value stocks can be thought of as companies whose stocks are priced favorably and may therefore represent particular “value” for the investor.  In fact, the Fama-French long-term data show that “value stocks” have generally outperformed growth stocks.  Over shorter horizons, though, growth stocks may do better than value stocks—and that is exactly what happened during the first half of 2017, with the Russell 3000 Growth Index showing total returns of 13.69% compared to just 4.32% for the Russell 3000 Value Index.

Many market participants, however, do not yet appreciate the fundamental, asset-class difference between REITs and non-REIT stocks—and those market participants generally treat REITs as if they can be classified with other value stocks (perhaps because it’s not as easy for investors to lose sight of future prospects).  Given that REITs are treated as value stocks by many investment decision-makers, it shouldn’t be surprising that REITs underperformed the broad stock market during a time when the same was true of other value-oriented companies.  Actually, REITs outperformed their value-stock peers that were not REITs by more than a full percentage point, 5.43% to 4.32%.

The second thing to notice is that this has been a large-cap rally, not a small-cap rally.  As with value vs growth, long-term Fama-French data show that smaller-cap companies have generally outperformed larger-cap companies.  Over a shorter horizon, though, large-cap stocks may do better than value stocks—and that is exactly what happened during the first half of 2017: the Russell 1000 Index of large companies showed total returns of 9.27% compared to just 4.99% for the Russell 2000 Index of small companies.

Again, REITs should not be classified with other stocks because their returns are driven by the real estate market cycle, not the business cycle.  For those market participants who do not yet appreciate the fundamental asset-class distinction, though, the important point is that while several REITs are large companies, in general the REIT industry still sits more firmly in the small-to-mid-cap part of the market: American Tower now leads the REIT industry with a market cap of more than $50 billion, but Apple is about 15 times that large!  So it shouldn’t be surprising that REITs underperformed the broad stock market during a time when the same was true of other smaller-cap companies.  Actually, REITs outperformed their smaller-cap peers by almost half a percentage point, 5.43% to 4.99%.

In other words, to get the closest comparison between REITs and the non-REIT part of the stock market you would pit REITs against small-cap value companies—and REITs actually outperformed that segment of the broad stock market decisively, with total returns of 5.43% compared to just 0.54% for the Russell 2000 Value Index.

Another thing to notice is that, while Equity REITs have outperformed their non-REIT peers, Mortgage REITs have outperformed nearly everybody.  The FTSE NAREIT All Equity REIT Index measured total returns of 4.88% during the first six months of 2017—very slightly below those of small-cap stocks (4.99%), though better than value stocks (4.32%)—but the FTSE NAREIT Mortgage REIT Index was the star of the show with total returns of 15.98%, quite a bit better than almost every other appreciable segment of the market.  (Information technology stocks, the best-performing sector, edged mortgage REITs with total returns of 17.23% over the same period.)  And REITs focused on home mortgages did better still, with massive total returns of 18.47% over that half-year.

On a long-term basis the most important point to recognize is the fundamental asset-class nature of REITs: that is, the fact that the returns of REITs are driven by developments in the real estate market cycle, not the business cycle that drives most of the rest of the stock market.  That’s why, over the last 25 years (since the “modern REIT era” started in the early 1990s) the correlation between REITs and the broad stock market has usually been between just 51% and just 64%; even the correlation between REITs and their closest cousins in the broad market, small-cap value stocks, has usually been between just 67% and just 75%.

Over any short period, though, investors may get a hankering for a specific group of stocks—and it turns out that the first half of 2017 was exactly that sort of period, one in which investors got a hankering for large-cap growth stocks even though those companies have more usually underperformed.  It’s good to know that, even when their category was out of favor, REITs still found a way to outperform their peers.