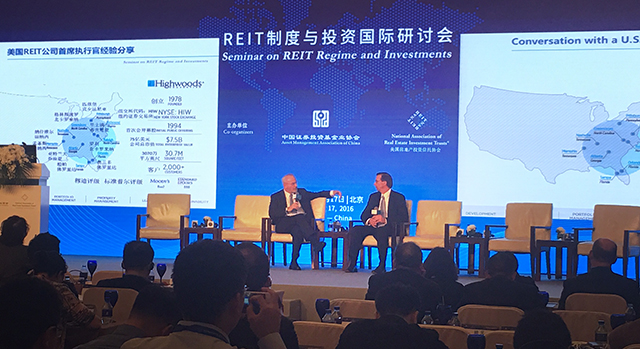 NAREIT in China (left to right): NAREIT President and CEO Steve Wechsler and 2016 NAREIT Chair Ed Fritsch of Highwoods Properties discuss the U.S. REIT regime during a seminar in Beijing on Oct. 17. The event was co-hosted by NAREIT and the Asset Management Association of China.

Earlier this month, 2016 NAREIT Chair Ed Fritsch, president and CEO of Highwoods Properties (NYSE: HIW), led a delegation of senior executives and U.S. REIT industry stakeholders on a trip to China for a series of events with investors and regulatory officials. 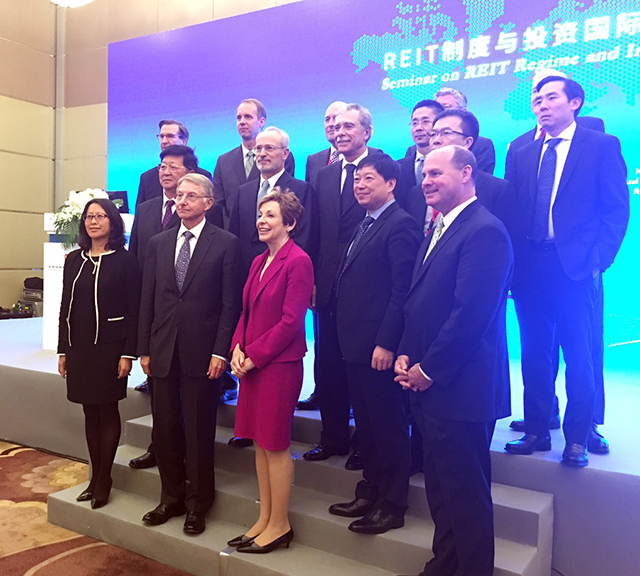 NAREIT in China: Speakers at the NAREIT-AMAC seminar.

NAREIT and the Asset Management Association of China (AMAC) co-hosted a seminar in Beijing on Oct. 17 that covered the REIT approach to real estate investment, as well as the evolution and performance of the U.S. and Asian REIT regimes. NAREIT’s representatives spoke on various panels during the seminar. Approximately 125 people were in attendance at the event, which was followed by a private dinner in the evening. Prior to the meeting, NAREIT representatives met with Li Chao, vice chairman of the China Securities Regulatory Commission.

NAREIT in China: Wechsler (far left) moderated a panel at the NAREIT-AMAC seminar on how to invest in REITs in the U.S. and around the world. Participants included (left to right): Jim Sullivan, president of advisory and consulting with Green Street Advisors; Jon Cheigh, executive vice president with Cohen & Steers; Mark Howard-Johnson, managing director with BlackRock; and Zhao Lei, CEO of Lion Capital Management.

The following day, the NAREIT delegation held a meeting with U.S. Ambassador to China Max Baucus. They discussed NAREIT’s outreach in China to institutional investors, real estate investors and policymakers.

The delegation attended the annual conference of the China REITs Alliance, with which NAREIT entered into a cooperative relationship in 2014. Wechsler delivered one of the keynote speeches at the event, while Fritsch participated in a panel on distinguishing “real REITs” versus “quasi-REITs.”  Howard-Johnson and Sullivan appeared on a panel that examined institutional investors’ views on REIT investment.

On Oct. 19, the NAREIT representatives met with officials from the Chinese Ministry of Finance to discuss the development of REITs in China.

Following the meetings in China, Wechsler and Gottlieb traveled to Kyoto, Japan, for a meeting of the Real Estate Equity Securitization Alliance (REESA) on Oct. 21 hosted by the Association for Real Estate Securitization (ARES), a REESA member which is chaired by Mitsui Fudosan Co. Chairman and CEO Hiromichi Iwasa. REESA also includes APREA, the British Property Federation (BPF), the European Public Real Estate Association (EPRA), the Property Council of Australia and the Real Property Association of Canada (RealPAC).

The meeting included discussions on: