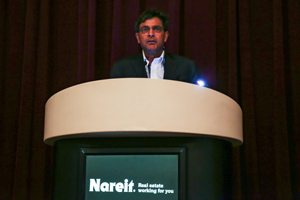 Nareit's DD&I initiative promotes the recruitment, inclusion, and advancement of women and other underrepresented groups in REITs and the broader commercial real estate industry.

Gottlieb urged those present to “get informed and get involved.” She described the push to increase diversity and inclusion as a “lifetime, all-hands-on-deck, multifaceted endeavor.”

Gottlieb outlined some of the items on the upcoming DDI agenda. In addition to a survey of REITs to assess their diversity and inclusion programs, Nareit will once again encourage senior female Nareit members interested in and available to serve on a board, to send their resumes to Nareit. The resumes will be sent on to several search firms.

In addition, CEOs that wish to add female representation to their boards can reach out to Nareit for resumes of those who consent to provide them, Gottlieb said.

Meanwhile, Nareit will launch an achievement award to be presented to both a Nareit corporate and individual member in recognition of an outstanding commitment to diversity and inclusion. Winners will be announced at REITworld 2019.

Nareit is also adding diversity and inclusion sessions to virtually all Nareit events going forward, according to Gottlieb.