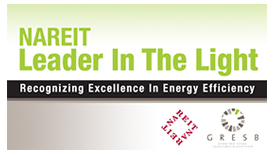 REITs' investments in sustainability keep rising, as do their returns on those investments, according to research on NAREIT's Leader in the Light (LITL) program.

A study of data from LITL found that participating companies increased their total investment in energy efficient projects by roughly 30 percent over their three-year moving average from 2011 to 2013. The study, which was conducted by RealFoundations, also determined that savings in 2014 from sustainability projects nearly doubled the previous three-year moving average. A similar comparison found that return on investment for those projects was up approximately 40 percent -- a 54 percent increase when compared with the ROI of 26 percent for projects between 2011 and 2013.

"The industry should be proud of its accomplishments," said Alok Singh, director of energy solutions at RealFoundations. "This is the second year we have analyzed Leader in the Light Award entries, and the results are stellar. It's clear that improving sustainability performance at scale is becoming more of a norm than exception in the real estate industry."

"Kudos to RealFoundations for conducting this insightful analysis," said Sheldon Groner, NAREIT's executive vice president of finance and operations who oversees the LITL program. "The results clearly demonstrate the progress we have made in all things sustainability as an industry, and I look forward to a similar upward trend moving forward."

CLICK HERE to read RealFoundations' report in its entirety.