Who is Still Working From Home? A Detailed Look at the Return to the Office

The following is excerpted from a Forbes.com column published July 12, 2021.

One of the biggest changes the pandemic brought to the U.S. economy and the daily lives of Americans was the rise of work from home (WFH). Tens of millions of Americans stopped going to the office and instead performed their job functions from their home office, or kitchen table, or bedroom (or the beach). As the economy opens back up again, many of these workers are returning to the office.

How many workers return, and how quickly, will have major implications for office real estate markets over the next few years. I took a deep dive into survey data that the Bureau of Labor Statistics (BLS) has been gathering along with the traditional monthly employment report, and which provide detailed information on who has been teleworking because of the pandemic.

To preview the findings of my analysis, more than half of those who were working from home last year have returned to the office. Among the occupations and industries that are major tenants in office buildings, however, the return to the office has been slower. Recent announcements by a number of major employers suggest that the return to the office may accelerate only after September. It is too soon to tell, though, whether most or all workers will eventually return to the office, or whether WFH will remain permanently higher after the pandemic ends. 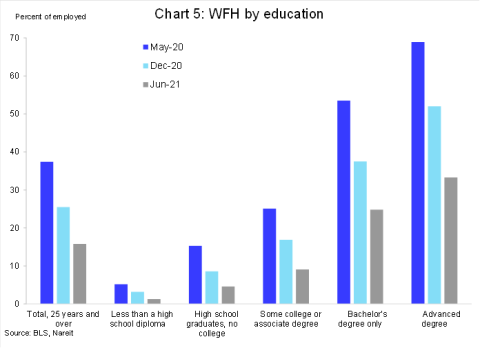 Visit Forbes.com for the full article examining the decline of remote work post-vaccine and how the return to the office will boost office real estate markets later this year and early next year.