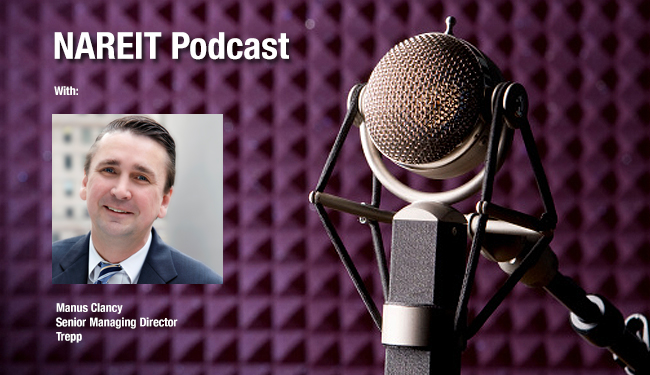 In the latest episode of the NAREIT Podcast, Manus Clancy of Trepp discussed the declining number of delinquent loans in commercial mortgage-backed securities (CMBS).

Trepp data show that the percentage of delinquent CMBS loans—the delinquency rate—has trended downward in the last two years in conjunction with the recovery in the commercial real estate markets. It fell to 5.23 percent in October, down approximately 15 percent from the year-earlier level.

In addition to stronger property valuations, special servicers have taken an aggressive stance toward disposing of assets on their books, according to Clancy. That has helped pushed the delinquency rate down, he said.

Furthermore, Blackstone buying the StuyvesantTown/Peter Cooper Villagein New York last month will have a significant effect on the delinquency rate, according to Clancy. He noted that the purchase of the 11,000-unit apartment property will move $3 billion out of the delinquent category. That should cut the delinquency rate by roughly 50 basis points, Clancy said.

Clancy downplayed the suggestion that the Blackstone deal might hide other weaknesses in the market. He pointed out that the multifamily sector already was improving before Blackstone sealed the deal.

"The drop in the delinquency rate will be huge," he said, "but it does underscore a multiyear trend."

Looking at the other sectors, Clancy expressed concern about the strength of the suburban office market and office space in general becoming outmoded. He also pointed to weakening in the retail business as a potential source of trouble for retail real estate owners.