Conditions in Place for Continued REIT M&A Activity in 2019 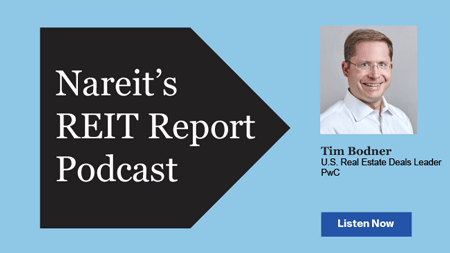 In the latest edition of the Nareit REIT Report podcast, Tim Bodner, U.S. real estate deals leader at PwC, discussed a range of topics, including the outlook for REIT mergers and acquisitions (M&A); the appeal of non-gateway markets; and the performance of non-traditional REIT asset classes.

“We do believe that conditions are in place for more of the same in 2019,” fueled in part by the “tremendous” amount of private capital available, Bodner said.

Property sectors likely to see M&A activity this year include hospitality and residential REITs, along with data center and tower REITs, according to Bodner.

Meanwhile, Bodner commented on the “dramatic” valuation differences between gateway and non-gateway markets, pointing to the almost 170-basis point gap in cap rates between Charlotte, North Carolina, and Los Angeles industrial property as an example. At the same time, deal competition across both gateway and non-gateway markets remains “quite significant,” Bodner said.