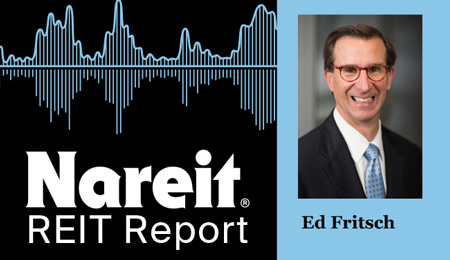 The latest edition of the Nareit REIT Report podcast featured an interview with Ed Fritsch, who stepped down as CEO of Highwoods Properties (NYSE: HIW) on Sept. 1 following a career of more than 30 years at the Raleigh, North Carolina-based office REIT.

Fritsch said that holding a variety of positions throughout his career at Highwoods enabled him to “leverage that information to the good of the company.”

A year after Fritsch became CEO, Highwoods implemented a strategic plan that remains in place today.

“I knew Highwoods was a good company, but I was keenly interested in how we could make it better. The team made a pledge that no person, no process, and no property was sacred—we popped the hood and questioned every part of the engine,” Fritsch said.

Highwood’s quality balance sheet has provided the company with significant flexibility to dramatically improve its portfolio, Fritsch noted. He pointed out that Highwoods recently announced a market rotation plan, which he expects will continue to provide opportunities to strengthen long-term growth.

As for current market conditions, “we all know it’s well beyond the ninth inning but so many aspects remain positive, like interest rates and demand, and expanding populations. The opportunities remain vast,” he said.