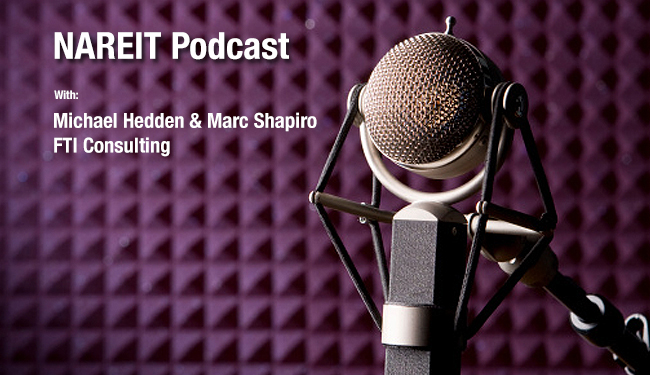 Michael Hedden and Marc Shapiro of FTI Consulting discussed their latest commercial real estate market commentary and projections for 2015 in the latest edition of the NAREIT Podcast.
Earlier in September, FTI Consulting issued a rosy analysis of the current state of the commercial real estate market. Hedden, a managing director with the firm, said market fundamentals paint an optimistic picture of the market’s future. Some of the positive indicators include growing gross domestic product (GDP), falling unemployment and improving consumer confidence attributable to increasing home prices and the rise of the stock market. Consequently, the broader economy is supporting higher valuations for commercial real estate assets, according to Hedden.
“Generally speaking, the overall fundamentals are there,” Hedden said. “Even though it’s small, we seem to have some positive momentum going forward.”
Fund flows and activity in the capital markets have contributed to the demand for real estate in gateway markets, Hedden said. Additionally, he noted that the supply of new assets coming online has remained muted.
Shapiro, also a managing director with FTI, pointed out that borrowing for commercial real estate is on pace with that of a year ago, while interest rates remain low. The largest increases in lending have come in the hotel, health care and retail sectors, he said. Furthermore, lending activity for commercial mortgage-backed securities (CMBS) has increased 45 percent in 2014 from the year-earlier period. The first half of the year saw $41 billion in CMBS issuances, slightly below 2013’s pace.
Hedden pointed out that REITs have remained active in terms of issuing equity. That continues a trend that started in 2013, when stock exchange-listed and public, non-listed REITs (PNLRs) raised approximately $85 billion combined. He noted that PNLRs doubled the amount of capital in 2013 that they raised the year before.
“That has been a significant aspect in the growth of real estate values,” he said.
This year, equity raises are trailing the pace set in 2013, but a “significant amount of capital is still being raised,” said Hedden, adding that companies are using the fresh capital to reposition assets and seek out new opportunities to generate yield.
“There has been a significant raising of capital by REITs, and that contributes to the overall health of the real estate market,” Hedden said.
CLICK HERE to download the latest edition of the NAREIT Podcast. You can also subscribe to the podcast via iTunes.