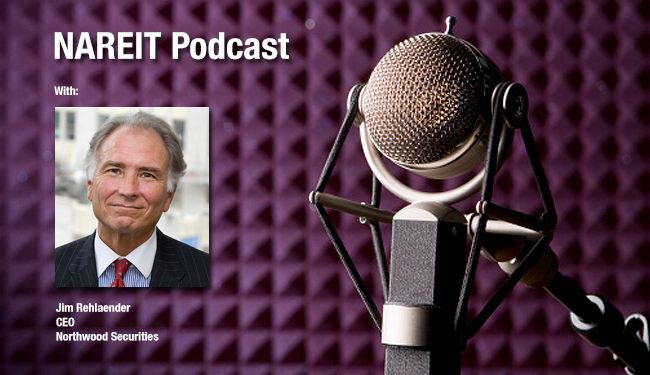 Jim Rehlaender, CEO of Northwood Securities, joined the NAREIT Podcast to discuss some of the latest trends in international real estate markets.

Northwood Securities invests in listed real estate companies around the world. Rehlaender offered his thoughts on some of the latest happenings in the developing markets of India, China and Brazil.

India’s government recently approved REITs. Rehlaender said it’s a market he has been watching for years. He said he has declined to invest in India, however, “due to a lot of complications.”

Despite the government’s proclaimed enthusiasm for building up the REIT market in India, progress has been slow, according to Rehlaender. He speculated that the government would likely pass new legislation to formally create a REIT structure in 2015. Yet, he also cautioned against going overboard with real estate investment in the coutry.

“It could open a massive amount of real estate investment in a market that sorely needs it,” he said. “The excitement about the new government has fed into the real estate stock prices as well. For the moment they look a bit expensive; and, yet, on the ground, these companies are really struggling with regulatory issues, with lack of demand, with what’s essentially an economic slowdown.”

China is also setting the foundation for the creation of REITs. Rehlaender noted that the Chinese government looks at REITs as a savings vehicle.

“The opportunity now, though, in China right now is to buy really well-managed companies that don’t have a lot of leverage that are taking market share and are trading at 40 to 60 percent below the value of their assets,” Rehlaender said.

Brazil is another market attracting attention from investors. Brazilian companies are facing the same infrastructure issues as India, according to Rehlaender. However, whereas India is on an “upward trajectory,” Rehlaender said Brazil’s current economic situation is giving him pause.

“From our perspective, we want to see that downward slope priced into the stocks,” he said. “It’s getting there, but not quite yet.”