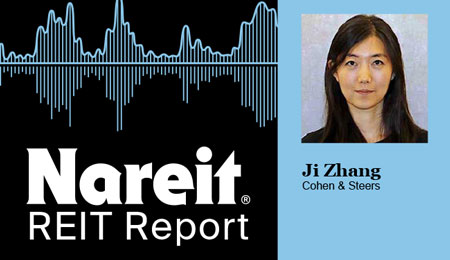 The latest edition of the Nareit REIT Report podcast looked at the advent of 5G—and what it means for infrastructure REITs—with Ji Zhang, senior research analyst at Cohen & Steers.

Zhang discussed the evolution of infrastructure REITs as a component of the broader REIT industry.

In 2000, traditional REIT sectors accounted for about three quarters of REIT market capitalization, she observed. Today, they count for just under half. The first data center REIT was listed in 2004 at just under $300 million in market cap. In 2012, the first tower company converted to a REIT at about a $30 billion market cap. Today, tower and data center REITs comprise just under 25% of the REIT investment universe.

“We believe these technology-oriented sectors will continue to gain in importance given their secular demand drivers and important roles in the digital economy,” Zhang noted.

The first 5G equipment is set for release at the end of this year or early 2020, according to Zhang. From a global perspective, the United States and South Korea have a slight lead in terms of being closest to a commercial roll-out, followed closely by China. Japan, the U.K., and Germany are probably still in the trial phase, she added.

In terms of investment from wireless carriers, Zhang noted that carrier capital expenditure has trended at about $30 billion a year for the past five to six years. “We think 5G investment could pick up in mid- to late 2020 and be well sustained into 2024 and beyond,” she said.

Traditional cell towers will probably remain the most efficient way to build out any network, including 5G, Zhang noted. “So far, we haven’t seen any technologies that propagate wireless signal more efficiently than macro towers. The closest we’ve come so far is small cell, which might be taking away 10% to 15% of demand from towers…but we do think any technology efficiency gains or replacements are likely to be more than offset by data volume growth.”

While positive secular demand tailwinds will likely sustain an elevated pace of growth over the near to intermediate term for infrastructure REITs, there could be peaks and troughs in the investment cycle, Zhang said.

“Given the attractive returns, we are seeing a lot of infrastructure money looking to put capital to work in these asset classes, which does have the potential to drive up supply,” she said.