Multifamily REITs a Sector to Watch

Analyst Richard Anderson of Mizuho reviews the tops stories in the REIT market from 2017 and looks ahead to the rest of 2018. 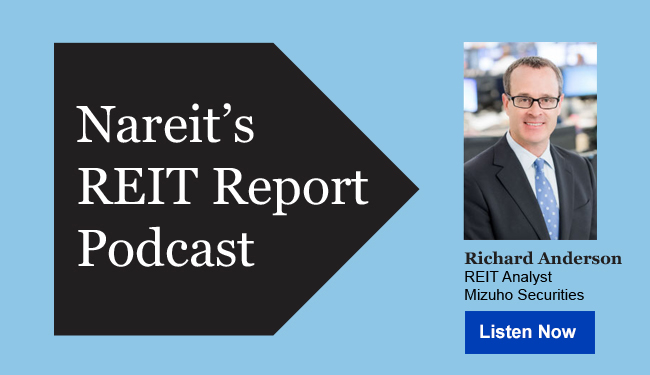 In the latest edition of Nareit’s REIT Report Podcast, Mizuho Securities analyst Richard Anderson recapped the REIT market's performance in 2017 and discussed some of the story's to watching in 2018.

Anderson was asked about the state of the retail REIT sector, particularly mall REITs. "The pace by which we saw store closings was a bit of a surprise," Anderson said. However, he pointed out that developments late in the year suggested an uptick in mergers and acquisitions could be on the way.

Regarding the tax reform bill passed at the end of 2017, Anderson said the new legislation would have positive implications for REITs.

In terms of stories to watch in the remainder of 2018, Anderson pointed to multifamily REITs. He said it could be a "nice holding pattern year for a sector with a long history of performing well" before seeing gains in the apartment sector in the second half of the year and into 2019.