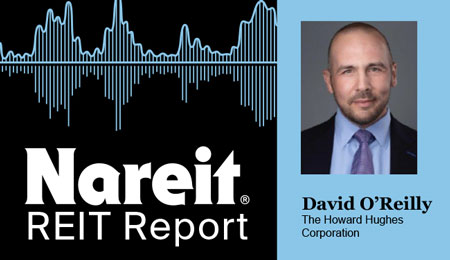 David O’Reilly, CEO of The Howard Hughes Corporation (NYSE: HHC), said the company has an “unparalleled opportunity” to continue to drive net asset value (NAV) growth over the next several years and decades.

O’Reilly was named CEO at the start of December, after serving in that position on an interim basis since September.

Speaking on the REIT Report, O’Reilly attributed the growth potential to increased demand for mixed-use live, work, play communities, coupled with over $1 billion of liquidity on the company’s balance sheet.

O’Reilly pointed to record home sales since the start of the pandemic in the company’s Houston master planned communities (MPCs) and home sales at its Summerlin MPC outside of Las Vegas that have eclipsed 2019 levels.

“We’ve seen a shift in both residents and companies looking to leave coastal cities and higher tax states” in favor of communities that offer safety and walkable outdoor amenities in a business-friendly environment, O’Reilly said.

O’Reilly also noted during the interview that:

· Howard Hughes has achieved many of the goals set in place about a year ago to streamline and decentralize its operating model, including the sale of non-core assets.

· Once a COVID-19 vaccine is distributed, the company expects to see in-migration as well as a return of local buyers and local businesses in Las Vegas, Houston, and Columbia, Maryland.

· 2021 should see continued year-over-year increases in underlying home sales at the MPCs, along with “very strong” land sales.

· The resiliency of Ward Village in Hawaii is emblematic of Howard Hughes’ overall strategy.