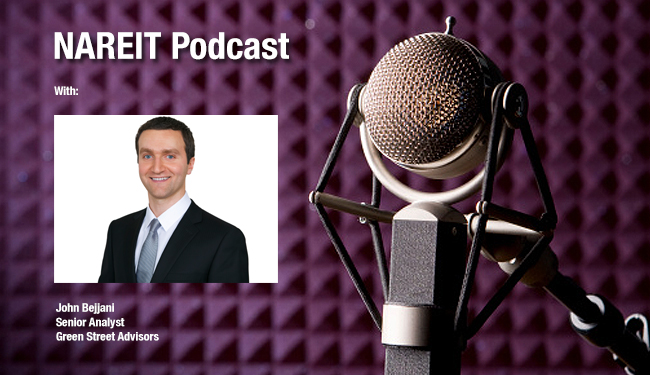 In the latest episode of the NAREIT Podcast, John Bejjani, a senior analyst with REIT research firm Green Street Advisors, discussed the outlook in the office sector in 2016.

Job growth and other measures of market health appear positive for the office sector. Bejjani described the office sector as a “late-cycle bloomer,” meaning that it’s poised for strong performance in the near future. He noted that demand for office space has been soft as a result of the excess amount of available space, but that is changing.

“Today, we’d say office fundamentals are pretty healthy,” commented Bejjani, who pointed out that Green Street is forecasting stronger fundamentals in the sector than all the other major property types. Notably, in markets where the supply of office space is growing, job and demand growth are growing as well.

Recently, the push to use space more efficiently has dragged the office sector down, according to Bejjani. Consequently, demand likely won’t reach the peaks seen during the last market cycle, he said.

Office real estate developers and investors who recognized the trend towards downsizing space had a chance to capitalize on the opportunity, according to Bejjani. More broadly, though, Bejjani observed that the functional obsolescence of some office space has increased.

“It’s our view that this trend has probably been a contributing factor to office leasing costs, specifically tenant incentives, remaining persistently high throughout the cycle, whereas in past cycles, leasing costs tend to decline as the cycle progresses,” he said.