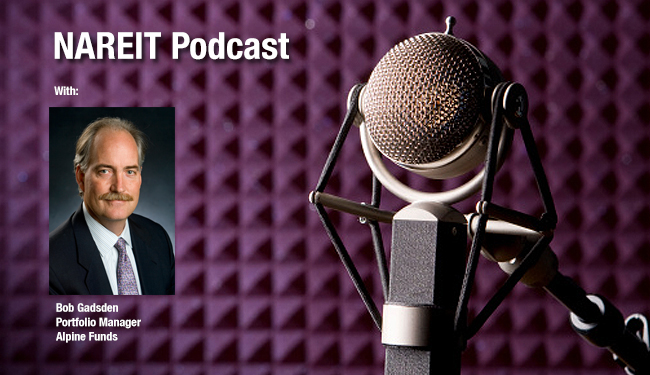 In the latest episode of the NAREIT Podcast, Bob Gadsden, portfolio manager of the Alpine Realty Income & Growth Fund, offered his opinion on some of the key factors driving real estate market performance in the current environment.

Gadsden’s fund was up more than 30 percent in 2014, and he cited a number of factors that boosted performance. He noted that his fund has zeroed in on companies with exposure to knowledge-based regional economies. Those include firms with assets on the coasts of the United States in markets such as San Francisco, Southern California and Seattle.

In terms of sectors that he currently favors, Gadsden said his fund is still overweight on office REITs.

“Office is the one sector—even in San Francisco—that remains below peak profitability and peak revenue generation,” he commented. “We’ve been overweight in that for several years and continue to be so and expect it to be a strong performer.”

“We would expect that retailers would have more confidence, and spending levels should be increased from all the savings that the consumer is experiencing,” he said.

Conversely, according to Gadsden, markets that are home to the energy industry may feel a pinch. “The markets that have had the strongest employment growth over the last year or two certainly have been in the oil markets,” he said. Going forward, Gadsden speculated that employment growth would begin to slow down in energy-centric locales.

Regarding interest rates, REITs will still have opportunities to lower their interest costs, according to Gadsden. “The big unknown is how high interest rates, particularly on the long end, rise,” he said. A sharp rise in rates could have a negative effect on REIT pricing, Gadsden noted. On the other hand, a gradual increase would likely have a more “balanced” effect on the REIT market, he said.