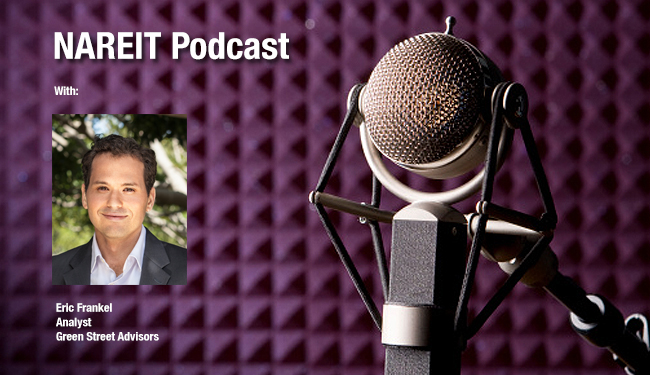 In the latest episode of the NAREIT Podcast, Eric Frankel, analyst with Green Street Advisors, discussed the latest developments in the industrial real estate market.

Amid a choppy global economic outlook, demand for industrial real estate has remained strong. Economic indicators suggest demand for space should be “fair to good,” but it has actually been “great,” according to Frankel.

“The only economic driver I can point to is the fact that inventory levels have been rising at a much faster pace than U.S. retail sales over the last couple years,” he said. “There are a number of theories behind it, but I think one that is quite reasonable is the fact that e-commerce has really delved into a variety of different businesses. That’s causing a lot of retailers to really stock up in their warehouses.”

Regarding the market for industrial property, Frankel noted that the sector has seen large portfolios trading hands in recent years at high valuations. Investors had taken advantage of the market downturn following the financial crisis to acquire industrial assets at attractive prices, according to Frankel. Later, they had a chance to sell the portfolios at higher valuations, he said.

Looking ahead, Frankel said “it’s unlikely” that as many major deals will get done in the near future, but interest in smaller transactions should stay “solid.”