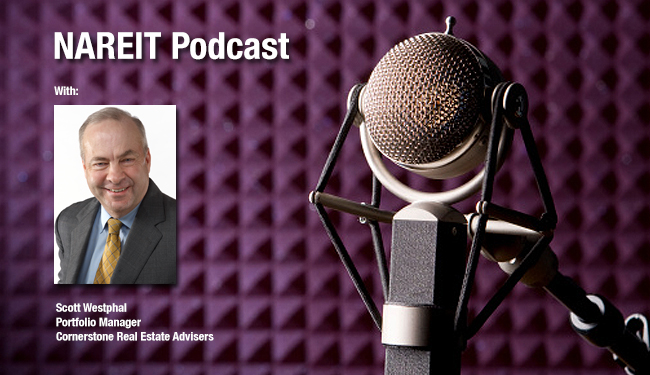 Westphal noted that in 2012 the REIT market faced concerns over sovereign debt issues in both the United States and abroad. The related fears concerning the impact of a reduction in spending also impacted REITs with exposure to the Washington market. Additionally, REITs had to deal with tepid economic growth, both at home and abroad.

“We really feel that, on the margin, some leasing decisions may be being delayed until the greater uncertainties over tax policy and regulatory policy begin to clarify themselves,” Westphal said.

On the positive side for REITs, West Coast markets showed resiliency last year, according to Westphal.
He also said investors demonstrated a preference for mid cap REITs over large cap REIT stocks, and they were surprised by low interest rates that persisted through the year.

Cornerstone views REIT sectors as generally being appropriately valued. However, Westphal said the company does see some potential value in the hotel and lodging sector.

When RevPAR growth is driven by rates, it doesn’t create additional operating expenses, according to Westphal.

Westphal said Cornerstone does have concerns about the state of the apartment REIT sector, and the firm is projecting that multifamily REITs will underperform early this year. Westphal also said his team at Cornerstone views the potential for shifts in governmental policies as an area of concern for health care REITs.