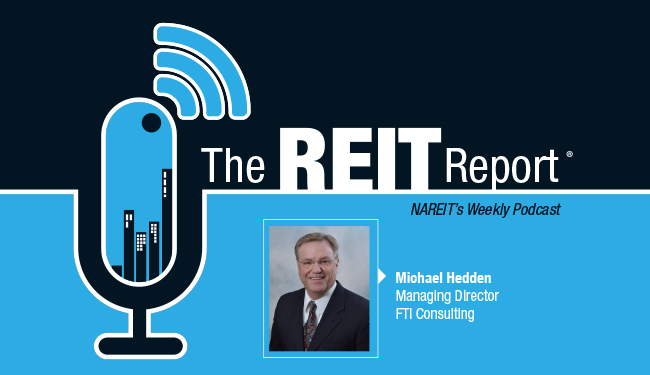 In the latest episode of The REIT Report: NAREIT's Weekly Podcast, FTI Consulting Managing Director Michael Hedden discusses what economic indicators are suggesting about the direction of the real estate market.

According to Hedden, property markets showed resilience in response to the economic challenges posed in the last year. He said capital sources are still showing interest in investing in real estate.

“The United States has been a very attractive market for those investment dollars,” Hedden observed.

Hedden also offered his thoughts on how real estate investors view President Donald J. Trump’s policy agenda. Although he cautioned that it’s too soon to come to conclusions since in the two months since Trump’s inauguration, early signs suggest there is some optimism in the real estate markets, according to Hedden. He noted that regulatory reform appears to be popular with real estate professionals, as is the possibility of tax reform.

Despite the signs of optimism, Hedden warned that any changes would come at “glacial speed.”

“It’s not going to be overnight in terms of the impact on the market,” he said.

For the rest of 2017, Hedden said he will be watching to see if—or how—political issues affect the market. Trends in the health care, retail and lodging sectors still bear watching, according to Hedden.