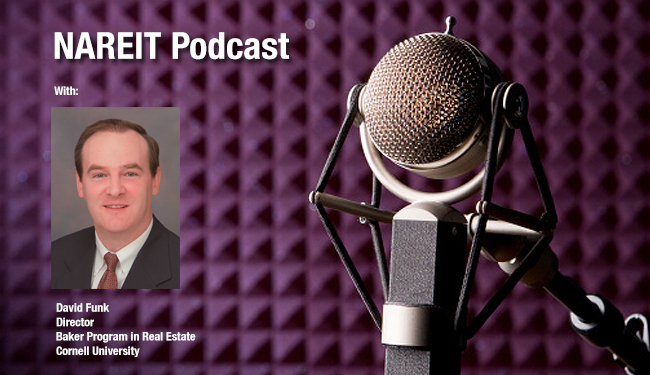 In the latest episode of the NAREIT Podcast, David Funk, director of the Baker Program in Real Estate at Cornell University, discussed his recent paper on elevating real estate to a fourth permanent asset class for institutional investors to join equities, fixed-income and cash.

Funk said an analysis of institutional investors’ portfolios found that they target roughly 10 percent of their holdings to real estate.

“This has been a steady increase over the last 25 years,” Funk observed. “That really argues that real estate has made it as the fourth mature asset class within institutional portfolios.”

From a global perspective, North American institutions lag other regions in their target allocations to real estate, according to Funk. He noted that major investors in the Asia-Pacific region generally have the highest targets for real estate, but their actual investments currently lag their goals.

“A lot of money from Asia-Pacific is going to be flowing into real estate globally,” said Funk, who pointed out that the United States was the likely destination for much of that new investment. Overall, he projected that institutions worldwide would need to direct nearly $800 billion into real estate to achieve their target allocations.