Real Estate Recruitment Expert Optimistic on Diversity of Board Composition

Ferguson Partners’ Gemma Burgess praises move to recruit members without prior board experience. 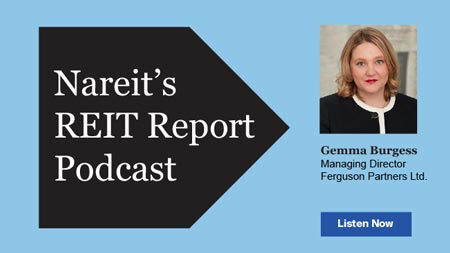 Burgess commented on California’s move to require public companies to have at least one female on their boards.

“We see it as a great step forward. Moreover, the importance here is placed on the investor community and boards to do the right thing… I think we’re seeing that in huge numbers at the moment across the country,” Burgess said.

Turning to some of the key trends in real estate executive hiring, Burgess noted that much of the focus today is centered around succession planning—either helping senior management identify the next generation of leaders within their firm ─ or seeking it from the outside.

Hiring activity is also focusing on bringing individuals from the advisory world, such as real estate bankers, into CFO positions, Burgess said. In addition, technology and operational positions are also seen as key.

Meanwhile, Burgess pointed out that 50 percent of the board searches Ferguson has performed for REITs in the past 12 months have been diversity hires. Most of those hires have been from outside the real estate industry, she said.

Burgess added that a move to recruit board members without prior public board experience has been a “big step forward” toward bringing in more diverse candidates.