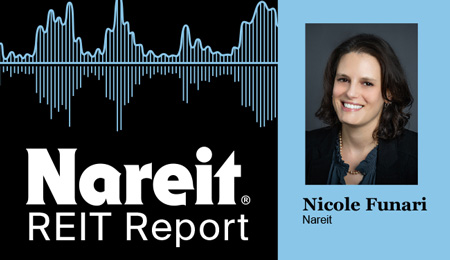 Nareit’s vice president for research, Nicole Funari, joined the latest edition of the REIT Report podcast to discuss some of the findings from Nareit’s latest REITs Across America data, including the contribution that REITs make to the U.S. economy, their geographic footprint, and their shareholder base.

Funari noted that the number of REIT properties has increased every year since Nareit began counting in 2016. The latest data shows over 520,000 REIT properties, comprised of 207,000 actual buildings, 219,000 signs or billboards, and 95,000 cellphone towers.

Traditional REITs still have the highest level of gross asset value, according to Funari, but some of the newer sectors like data centers have shown the most growth over the past three years. Lodging has also shown large growth in gross asset value, as has retail, which has posted the second highest growth rate over the past three years. While the value of traditional mall and shopping center assets are down, there has been an uptick in the gross asset value of single tenant retail and restaurants, Funari explained.

Meanwhile, Funari pointed out that overall, the REIT economic contribution has remained on an upward trajectory, with an increase of 19% from 2016. REITs also paid over $19 billion in property taxes in 2018, she said.