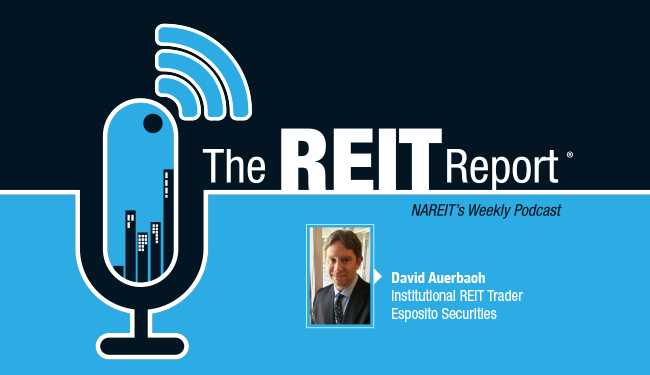 In the latest episode of The REIT Report: NAREIT's Weekly Podcast, David Auerbach, an institutional REIT trader with Esposito Securities, offered an overview of some of the biggest stories in the REIT market in 2016. He also discussed some of the stories to watch in 2017.

Auerbach noted that the retail REITs are still working through waves of store closures. “A lot of these REITs are impacted as far as having to backfill these spaces,” he said. He pointed out that the intervention of mall REITs Simon Property Group (NYSE: SPG) and General Growth Properties (NYSE: GGP) to rescue apparel retailer Aeropostale from bankruptcy is a key development to track in 2017 with regard to how REITs will respond to disruption in their tenants’ businesses.

Auerbach also encouraged market watchers to keep an eye on the ongoing growth of showrooming at malls as retail REITs seek to offer consumers experiences beyond those available to them via e-commerce. That also means the addition of more restaurants and entertainment options at shopping centers, according to Auerbach.

Regarding the mergers and acquisitions completed in the last two years, Auerbach said he expects the trend towards consolidation to continue this year. He noted that the mergers that occurred in ’16 were “across the board” in terms of sectors.

Looking at the creation a new headline sector for real estate under the Global Industry Classification Standard, Auerbach said he still believes last year's move will be a net positive for REITs in the long run.

“I’m still going on record as saying that a lot of these generalist/diversified funds will be launching REIT and real estate products this year,” he said. “I think you are going to see a lot more people get involved.”

Lastly, Auerbach speculated that the market has already priced in the effect of likely interest rate hikes in ’17.