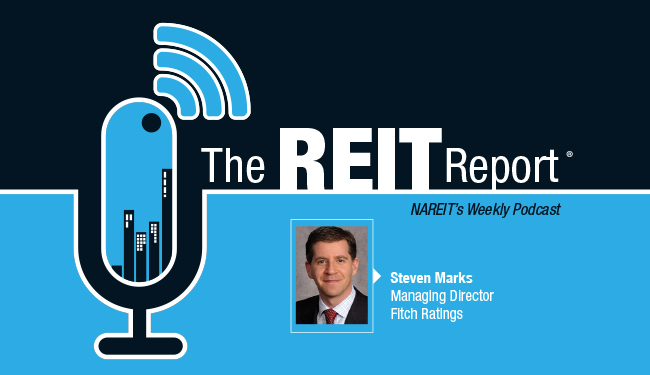 In the latest episode of The REIT Report: NAREIT's Weekly Podcast, Steven Marks of Fitch Ratings discussed the firm's latest research on liquidity in the REIT market and REITs' access to the capital markets.

A year ago, Fitch expressed concerns about REITs' liquidity. However, Marks said the liquidity profile of the REIT market has changed in the last 12 months. Fitch found that for the period from July 1, 2016, through the end of 2018, the median liquidity coverage ratio, which measures the ratio of highly liquid assets to short-term net cash outflows, for select U.S. Equity REITs was 1.7. That was up from 1.2 at the end of the second quarter in 2015.

In the second quarter of 2016, REITs drew approximately 15 percent of their unsecured credit line capital, which Marks pointed out to be extraordinarily low. Marks also noted that REITs have acquired capital from unsecured bank term loans "much more heavily than they've done in the past," which he said was concerning to Fitch.

"We would think that, given how open the capital markets have been in the public space for the last three or four years, companies would be relying less on their bank relationships and bank funding," Marks said.

Regarding the creation of a new headline sector for real estate under the Global Industry Classification Standard (GICS), Marks said the change will have a "derivative effect" on the REIT market's liquidity profile. He pointed out that, on the margin, the move will likely create more equity interest in REITs.

"Companies may be slightly more inclined to issue equity than they had been," he said.