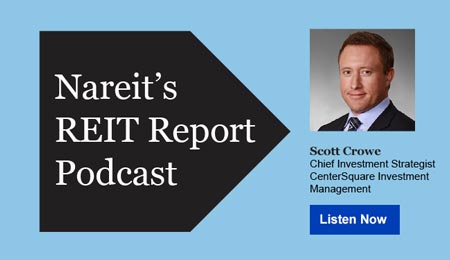 “Essentially the choice that the market is giving investors today is, would you rather own the five most popular tech stocks in America, or half of all the commercial real estate in this country?” Crowe said. While FAANG stocks are interesting and dynamic, the largest tech companies of today may not be at the top a decade from now. Real estate, however, is still going to be around to house the companies of the future, he noted.

According to Crowe, the current valuation discrepancy between REITs and FAANG stocks “just feels too wide.” He noted that REITs have only been this cheap versus the entire equity market twice before—in the tech boom of the late 1990s/early 2000s, and in the global financial crisis.

Crowe noted that easy money policies have supported the ability for many of the large tech companies not to turn a profit. The bigger risk for the withdrawal of easy money policies, which will probably accompany the end of the current cycle, is not in the REIT space but in some of the elevated tech stocks, he said.

Meanwhile, Crowe said CenterSquare is becoming a little more cautious on some of the property types that have seen demand growth triggered by some of the trends that have propelled the tech sector. In response, CenterSquare is seeking out parts of the market that have been overlooked by investors—including high-quality retail and the apartment sector.