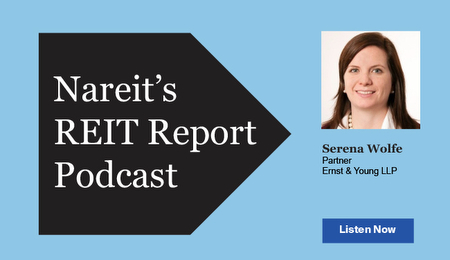 In the latest edition of the Nareit REIT Report podcast, Serena Wolfe, a partner at Ernst & Young LLP, discussed the Financial Accounting Standards Board’s lease accounting standard that took effect for publicly traded companies, including REITs, at the beginning of 2019.

The new standard had been under discussion for 10 years or more, and “where we actually ended up is very different from where we began,” Wolfe said. The impact for REITs as lessors is not as significant as originally anticipated, and definitely not as large as for lessees, such as restaurants and retailers, she noted. REITs that are lessees, through a ground lease or a building lease, for example, “could face a large absolute dollar value on the balance sheet.”

REITs, meanwhile, are largely up to date in adopting the new standard, according to Wolfe. She added that the new standard eliminates real-estate-specific lease guidance, meaning that REITs now have to follow guidance for leases of all assets. REITs will have to step back and look at their procedures and controls and figure out how they need to be adapted or changed, which is “particularly important for our public REITs that have internal control reporting,” she said.

Wolfe noted that the most challenging aspect in terms of making the change has been the determination of the incremental borrowing rate that a REIT needs to calculate the lease liability and the right-of-use asset when it is a lessee. She added that this could be particularly complex when determining a rate for a 99-year ground lease.

As to whether the new standard could have a knock-on effect on the number and types of leases into which companies enter going forward, Wolfe said it remains to be seen whether lessees are more inclined to adopt short-term leases. “So far I haven’t seen a change in strategy for the lessees.”