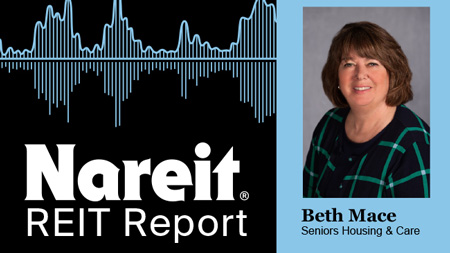 In the latest edition of the Nareit REIT Report podcast, Beth Burnham Mace, chief economist and director of outreach at the National Investment Center for Seniors Housing & Care (NIC), looked at the latest trends and developments in the senior housing sector.

Mace described today’s typical senior housing resident as 83 years old with higher acuity needs than in the past. “Because of the great recession, people delayed the timing of when they moved into senior housing, and that has held to be true even today.”

Overall, “demand has been strong, it just hasn’t been strong enough,” given the addition of new supply into the market, Mace said.

During the third quarter, the highest level of construction activity was underway in New York, followed by Dallas, Atlanta, Phoenix, and Houston. This contributed to downward pressure on occupancy in some of these markets, according to Mace.