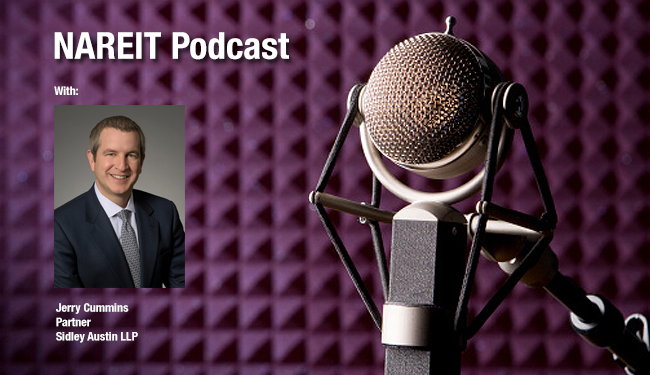 Jerry Cummins, partner with the law firm Sidley Austin LP, discussed some of the recent developments in commercial real estate transactions and capital markets in the latest edition of the NAREIT Podcast.

Cummins talked about the areas of the market that have seen the most deal-making activity so far this year. He noted that much of the action has centered on public, non-listed REITs (PNLRs), as opposed to specific sectors in the REIT industry. Numerous PNLRs are considering liquidity events, according to Cummins, such as listing on stock exchanges or merging with other companies.

In terms of sectors, health care has been “pretty busy,” Cummins said. Additionally, he pointed to “significant interest” in triple-net lease real estate.

Generally, the deals that are being made involve larger companies acquiring smaller players, according to Cummins. In a number of cases, stock exchange-listed REITs are acquiring PNLRs, he said.

Cummins said 2014 has been a “slower year” for REITs in the equity markets as fewer companies are going public or holding follow-on equity offerings. Debt transactions are roughly even with 2013, he said.