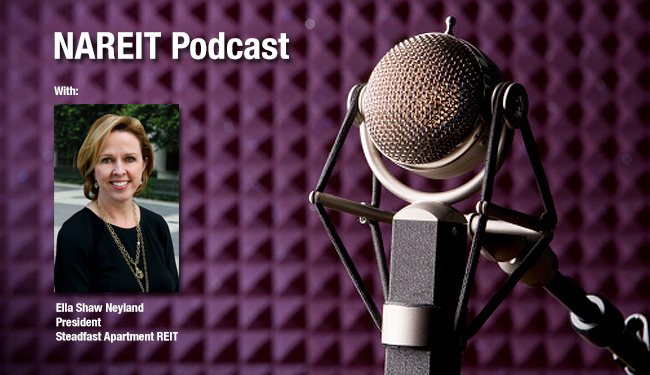 In the latest episode of the NAREIT Podcast, Ella Shaw Neyland, president of Steadfast Apartment REIT, discussed the firm’s latest acquisitions in the Texas market and looked at the broader dynamics of the multifamily market in the United States.

Earlier this month, Steadfast announced the purchase of a 315-unit apartment community in Coppell, Texas, a suburb of Dallas. Roughly a quarter of the company’s billion-dollar portfolio of multifamily assets are now located in the state of Texas.  Neyland said the rapid growth in cities such as Dallas and Austin makes Texas an enticing spot for investment.

“People are moving there to find jobs, and, of course, job growth is the strongest creator of the demand for apartments,” she said. Neyland also identified Denver and Atlanta as other attractive growth markets for apartment owners.

Regarding balance of supply and demand for apartments in the United States, Neyland said the new construction coming online is making up for development that was foregone during the financial crisis. The new influx of supply isn’t “anything to be overly concerned about,” according to Neyland. She noted that most of the new building is taking place in coastal markets and is focused on luxury apartment units. Conversely, the economics of development in the current market don’t favor building moderately priced apartments, according to Neyland.

“Long term, I think we’re probably undersupplied with apartments in the United States,” she said.