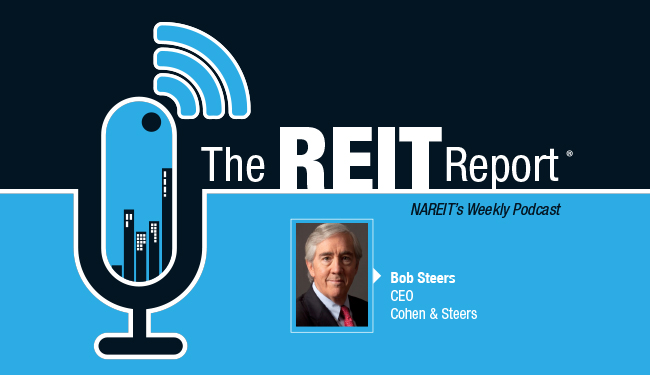 In the the latest episode of The REIT Report: NAREIT's Weekly Podcast, veteran REIT investor Bob Steers reflected on his experiences launching the first real estate securities mutual fund in 1985 and offered his views on the future of the industry.

The current CEO of real estate investment firm Cohen & Steers said the fact that so much real estate was owned privately before the mid-1980s discouraged the creation of mutual funds prior to forming his fund while with National Securities and Research Corporation. He also noted that investors weren't accustomed to thinking of real estate as a realistic investment option.

"It was pretty brutal" being the first offer a real estate fund, Steers said. Aside from it being the first fund of its kind, he had to go through steps such as finding a law firm to draw up a prospectus from scratch. Steers said he also had to educate his firm's sales force on the mechanics and characteristics of REIT investment.

"It was a tremendous challenge," he said. "Candidly, in the first couple of years, we didn't raise a lot of money. The sales people loved it because it was a product nobody else had, so it helped them get meetings and get their foot in the door, but they always ended up selling something else."

Thirty years later, Steers describes securitization of real estate as a "grand slam home run." The U.S. REIT experience helped promote the growth of securitized real estate around the world, according to Steers.

Regarding the pending move of real estate to a headline sector under the Global Industry Classification Standard (GICS), Steers downplayed the likelihood of massive capital flows into the REIT market in the near term. However, it will still represent "a huge step forward for REITs," according to Steers, because the correlation between the trading patterns of REITs and financial stocks will weaken.

"REITs will trade much more closely related to their underlying fundamentals and the underlying characteristics of their cash flows," he said.

Looking to the future, Steers said he expects the REIT industry will look very similar to now, but larger. That will mean not only more REITs in existence, but also more REIT regimes in place around the world. Additionally, retirement investment products will devote a greater share of their assets to REITs and real estate, according to Steers.