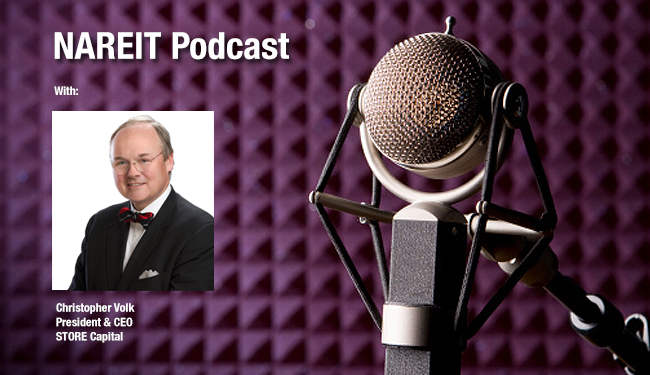 In the latest episode of the NAREIT Podcast, Christopher Volk, president and CEO of STORE Capital (NYSE: STOR), discussed the REIT's IPO in late 2014 and the transactions market in the net lease sector.

STORE Capital invests in “profit-center properties,” according to Volk, which consist of “assets that are used by real estate-intensive companies to generate their sales and profits.” These include chain restaurants and health clubs. Approximately 70 percent of the company’s portfolio is occupied by service companies, with retailers occupying roughly 15 percent of the portfolio and the remainder dedicated to industrial tenants.

“While we own today about $2.8 billion worth of real estate, the reason we own that real estate is because of the service we provide our tenants,” he said.

Additionally, Volk addressed the company’s decision to hold its initial public offering (IPO) in 2014, a year that saw limited action in the REIT IPO market. Volk said the idea of “timing the market” never entered into STORE Capital’s decision to go public.

Volk also pointed out that “the bar for being a public company in the REIT space is higher than it ever has been.”