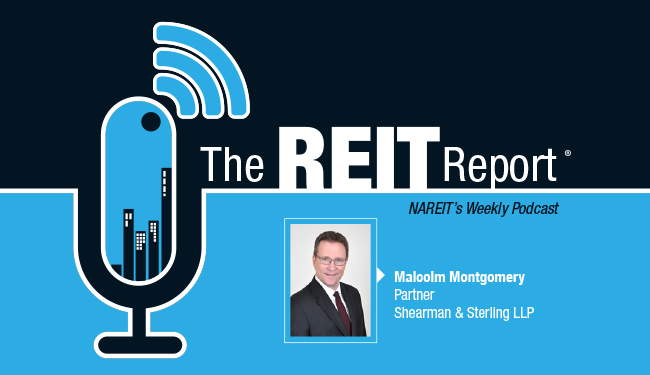 In the latest episode of The REIT Report: NAREIT's Weekly Podcast, Malcolm Montgomery, partner with Shearman & Sterling, discussed his views on the potential impact of public policy changes on real estate investment. He also offered an upbeat assessment of the market for industrial, data center and single-family home rental REITs.

Montgomery noted that financial markets have had a favorable response to the election of President Donald J. Trump. Investors expect the new administration to be "economy friendly," according to Montgomery. However, he also pointed out real estate markets tend to prosper in times of stability, and it remains an open question as to whether the White House's economic policies will create consumer confidence.

Concerns about volatility persist as well, according to Montgomery, along with questions about the impact of potentially tighter immigration policies.

Regarding the capital markets, Montgomery said many REITs have strong capital structures despite rising interest rates. "There were large amounts of unsecured debt issued in 2016 to lock in lower rates," he said.

Montgomery also pointed out that rising inflation can work to the advantage of real estate investors.

"Over time, inflation leads to increased rents and healthy capital gains on real estate investments, and, therefore, inflation will ultimately increase the value of REITs and other real estate equities," he said. "The prospect of inflation is not a death knell for REIT investing at all."

In terms of other developing stories in the real estate market, Montgomery pointed to the shrinking gap in performance between major metropolitan markets and secondary cities. He also highlighted possible challenges facing certain sectors, including how health care policy reform could affect health care REITs. As another example, mall REITs with assets in secondary and tertiary markets could continue to feel pressure from the ongoing disruptions in the retail business, according to Montgomery.

Montgomery characterized the outlook for industrial REITs as "upbeat," thanks to higher consumer confidence and increased spending. Prospects for single-family home rental REITs and data center REITs are also promising, Montgomery said, although he warned of the risk of overbuilding in the data center sector.