VICI Properties “Back on the Offensive,” CEO Says 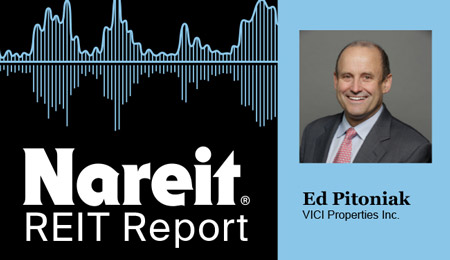 After spending much of the second quarter in a defensive mode, VICI Properties Inc. (NYSE: VICI) is now actively looking for ways to opportunistically deploy capital, says CEO Ed Pitoniak.

Speaking on the Nareit REIT Report, Pitoniak said that once VICI began to receive signals that its assets, particularly those in regional markets, were going to reopen strongly following COVID-19 shutdowns, “we felt confident enough to go back on the offensive.”

In mid-June, VICI announced it had agreed to provide a $400 million mortgage loan secured by the Caesars Forum Convention Center in Las Vegas and had also agreed to acquire approximately 23 acres of undeveloped land parcels adjacent to the center of the Las Vegas Strip for approximately $103.5 million.

At the same time, VICI raised $662 million of primary equity, an amount that exceeded the funds necessary for the Las Vegas transactions. The extra funds “should give us firepower to be very opportunistic in the months and quarters ahead,” Pitoniak said.

During the podcast Pitoniak also commented that:

•  The gaming industry is starting to discover how it will develop its next generation of customers, namely millennials