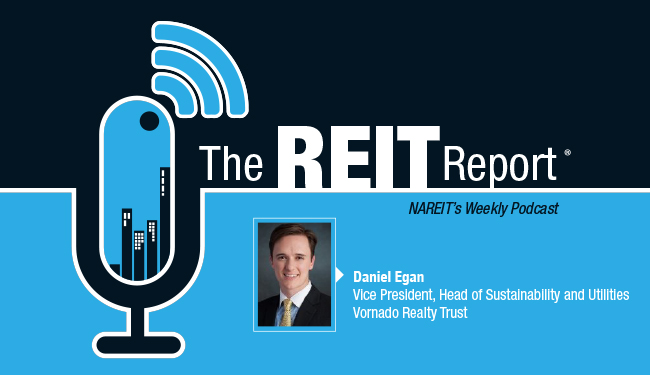 In a special edition of the The REIT Report: NAREIT's Weekly Podcast, Fulya Kocak, NAREIT's vice president for environmental, social and governance issues, spoke with Dan Egan, head of sustainability and utilities at Vornado Realty Trust (NYSE: VNO), about the company's efforts to use tenant engagement to improve sustainability performance.

Vornado received the the 2016 Leader in the Light Award in the Diversified category. The awards recognize NAREIT Corporate Members for leadership and innovation in sustainability.

Egan described Vornado's approach to sustainability as "a series of very important partnerships," including its relationships with tenants. Given the diversity of Vornado's tenant base, that means finding solutions to address a broad range of workplace cultures, according to Egan.

Regarding resource consumption, Egan pointed out that tenants control roughly 70 percent of the energy consumed by Vornado's assets. "The greatest components of our carbon footprint come from the energy that we spend in our buildings," he noted.

As a result, Vornado offers best practices for conservation to its tenants. Egan said tenants often look for guidance on how to interpret their own sub-metered energy data. Those conversations can lead to "operational experiments" for tenants in cutting resource consumption, according to Egan.

In terms of advice for starting tenant engagement efforts, Egan observed that focusing on a company's tenant base as a whole can't account for the unique challenges posed by individual tenants. Instead, he advised that real estate owners build on some of their more productive early relationships to compile lessons learned and best practices.