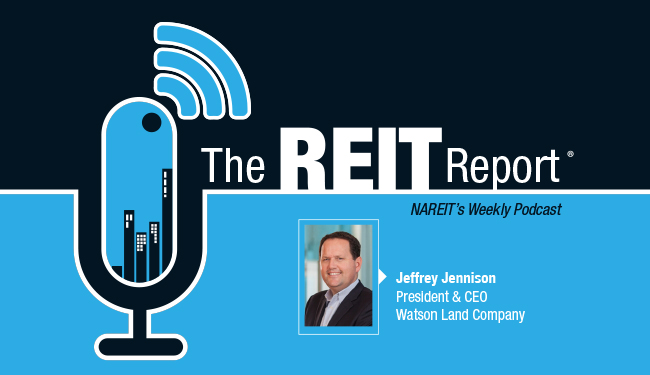 In the latest episode of The REIT Report: NAREIT's Weekly Podcast, Jeffrey Jennison discussed his transition into the role of CEO of private industrial REIT Watson Land Company.

Bruce Choate served as Watson’s CEO from 2003 until his retirement in March. Watson announced this week that Jennison, who has been the company’s president since 2014, would officially add CEO to his title.

Jennison said Watson had enjoyed a smooth transfer in leadership. Jennison and Choate worked closely in the last three years.

“It has been a seamless process, and we have a really experienced management team,” Jennison noted.

Choate began to step away from heavy involvement in Watson’s decision-making process in the middle of 2016, according to Jennison, who described the period as a “loose transition” in preparation for Choate formally stepping down.

In terms of Jennison’s vision for the company, he said Watson will remain primarily focused on the Southern California market.

“While we are looking to expand and diversify into other markets over time, that’s a strategic endeavor, but at the same time, it’s not at the expense of our long history in Southern California,” Jennison commented.

That doesn’t mean Watson will avoid opportunities outside the Southern California footprint. The company has already set up operations in Pennsylvania’s Lehigh Valley, for example.

“We feel a tremendous amount of responsibility to our communities,” he said. “Our history guides us each and every day.”