A Random Walk Down REIT Street 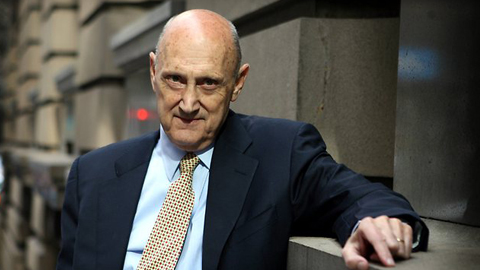 It would be difficult to find many individuals who have had a more profound influence on modern investing than American economist Burton Malkiel. Now 81, Malkiel’s seminal work, “A Random Walk Down Wall Street,” challenged conventional wisdom regarding the value of active portfolio management.

First published in 1973, “A Random Walk” is now in its 10th edition. Malkiel, who now serves as the chief investment officer for financial advisor Wealthfront, remains as adamant now in his views on index investing as he was 40 years ago. He also continues to tout the importance of REITs to investment portfolios.

REIT magazine talked with Malkiel about the true meaning of efficient markets, why he decided to take on the wealth management industry and how REITs should be used in portfolios.

REIT: Forty years after its first publication, “A Random Walk Down Wall Street” remains one of the most influential books ever written on investing. Is there a story behind what motivated you to write the book in the first place?

Burton Malkiel: I had started my career on Wall Street. As someone who is a questioning individual and who saw securities analysts at work, I increasingly wondered whether the emperor had any clothes.

It was the Wall Street experience and wondering whether all of these high-priced people were worth what they were getting paid that convinced me to look more carefully at this and eventually write the book.

REIT: In your own words, how would you sum up the lesson of “A Random Walk?”

Malkiel: I would say that there are two lessons. One is that markets are efficient in the sense that information gets reflected without delay. Market prices will change with news, but true news is random—that is, unpredictable. If there’s a headline in the newspaper that retailers are stocking up for Christmas sales, that’s not news. If there is a typhoon in the Philippines or some drug company gets approval for a drug that is going to cure a certain kind of cancer, that is news and it will get reflected immediately in stock prices.

"REITS are part of our Wealthfront portfolios, and I think they deserve a place in all portfolios."

REIT: In the time that has passed, have you seen any evidence that has caused you to re-evaluate your analysis of the value of “buy-and-hold” investing versus professional money management?

Malkiel: I don’t think so. Frankly, I would say that I believe in the thesis even more today than I did when I first wrote the book in 1973.

REIT: What is the greatest difference when it comes to investing today as opposed to 40 years ago?

Malkiel: The major difference is that when I wrote the book there were no index funds. In the first edition, I said there ought to be index funds. The first one was produced by Vanguard three years later in 1976.

In terms of doing something for investors and telling them what to do, all of the instruments that I talk about today really didn’t exist before. The thesis hasn’t changed, but the way to practically implement some of the ideas has changed enormously.

REIT: Professionally managed funds and the investment industry certainly don’t appear to be going away any time soon. How do you reconcile that with the efficient market hypothesis? If index funds are likely to outperform actively managed financial products in the long run, why do so many investors continue to opt for active management? Is there a place for active management within your paradigm?

Malkiel: My portfolio is 90 percent indexed. In the other 10 percent, I’ve got an active fund in there and I’ve got a few individual stocks.

Anyone who has studied the stock market all his life is going to find it interesting. Clearly, there is a fun aspect to it. I suppose you could argue that, particularly because it’s fun, if you wanted to be in a particular part of the market, maybe you could justify an active manager in that part of the market. But I’m not even sure that holds water. I think if you wanted to do it, you still ought to just index the industry.

REIT: How do you see target date and lifecycle funds impacting the investment marketplace, and do you think that this has been for the better?

Malkiel: I think that’s a good idea in general.

What we know is that young people starting off ought to be basically equity investors. If you’re going to hold your stocks for 45 or 50 years, what do you care if they’re volatile in the short run? As long as it doesn’t make you sick and you can sleep at night, accept that kind of volatility. If you’re a widow aged 70, where reversal in the stock market is going to hurt your standard of living, you can’t be an all-equity investor. You’ve got to have safer stuff.

REIT: Given your views, it is interesting that you joined an investment advisory firm, Wealthfront, as its chief investment officer in 2012. What spurred you to make this move?

Malkiel: Wealthfront is an organization that uses index funds, that charges rock bottom fees and is really the implementation of all of the ideas that I’ve had over the years. It is totally consistent with the view that I espoused.

REIT: How do REITs figure into your investment strategy? What kinds of benefits do they bring to a portfolio?

Malkiel: REITs are a part of our Wealthfront portfolios, and I think they deserve a place in all portfolios.

In general, they’ve had reasonably good rates of return, like common stocks in general. They typically are a bit safer. They throw off income. To the extent that my 70-year-old widow is going to have at least some stocks, REITs would be terrific because they have generous dividends.

The bottom line for me is that REITs are a very serviceable investment. They’ve generally done well for people, and it may well be that they are particularly suitable in the portfolios of those in or near retirement because they’re generally somewhat more stable and they throw off a good income.