One of the nation’s first REITs, Urstadt Biddle Properties Inc. (NYSE: UBA and UBP), believes its targeted retail real estate investment strategy will remain sound for many years to come. The company celebrated its 50th anniversary in 2019, and among its enviable achievements include a record of paying 50 consecutive years of uninterrupted dividends and 26 consecutive years of increasing dividends.

Urstadt Biddle was formed in 1969 by Merrill Lynch as a net lease REIT, diversified by property type and geography with more than 50 retail, office, and industrial properties spread across 20 states. Today, it bears little resemblance to its earlier self.

New management understood that broad diversification, without an in-depth understanding of geographic submarkets and property types, was not a winning formula. Accordingly, the new team instituted five principles that would guide the transformation of the portfolio and the strategy of the company. These guidelines continue to govern Urstadt Biddle’s decision-making today:

Willing “Wing” Biddle, the company’s current president and CEO, says adherence to those original principles guided the transformation of the portfolio “from a diverse collection of properties stitched together by an outside manager into a cohesive group of complementary assets that, for the most part, an investor can tour within a 60-minute driving radius from New York.”

Consistent with the change in strategy, all but one of the company’s original properties has been sold and gradually replaced with 83 properties in high-barrier-to-entry suburbs near the Big Apple, 57 of which are open-air shopping centers.

“Not only is there a scarcity of nearby suitable land zoned to permit a shopping center in our market, but the high cost of land and construction makes it very difficult to build a competing shopping center at an adequate return on investment,” Biddle says.

Although several of Urstadt Biddle’s competitors have placed their acquisition programs on the back burner and focused on renovating existing properties, Biddle says the REIT is still focused on acquisitions.

“We want to be in the market buying so that when a good property becomes available at the right price, we don’t miss it,” he says.

That the company chose to focus on open-air shopping centers within a relatively small geographic area has been both an advantage and a challenge. An advantage because, in the words of Craig Kucera, managing director of real estate equity research at B. Riley FBR, Inc., the company’s focused geographic strategy has made it a “sharpshooter” in its acquisitions. “Urstadt Biddle has deep roots in the area around New York and extensive knowledge of all the relevant players,” he says. “Because of this, they’re able to buy smaller deals that are often missed by larger investors and find off-market deals while being creative in their efforts.”

The company’s $12 million December 2018 purchase of Lakeview Plaza shopping center in Brewster, New York, is an example. The company acquired the property from a lender that had foreclosed on it. In addition to having 24,000 square feet of retail space vacant when acquired, the 173,000 square-foot center required the reconstruction of a large retaining wall and suffered from years of deferred maintenance. Today, construction at the center is nearly complete, and 85% of the acquired retail vacancy has been placed under letters of intent with new tenants, which will enable Urstadt Biddle to reap a yield on investment above and beyond the initial 8% estimated at purchase.

It is well-located, value-add properties like Lakeview Plaza that present the best opportunities for the company to shine, Biddle says.

Finding properties that meet the REIT’s stringent criteria—and are available—adds complexity to the acquisition process.

“We continue to think grocery-anchored retail is the best type of retail investment, and that’s predominantly what we’ve purchased since 1988,” Biddle says.

Typically, the company tries to grow its portfolio 5% to 10% per year in terms of size. However, Biddle says it’s tough to find good-quality properties in a tight market that people want to sell.

“As a result, we’ve had to become more creative and nimbler, using our robust DownREIT program, for example, to target family-owned properties with a low income tax basis that are ripe for succession estate planning,” he says. [Under a DownREIT transaction, the seller receives a combination of cash and operating partnership units in a new entity formed to purchase the property.]

Biddle is the first to admit that managing retail properties isn’t easy. 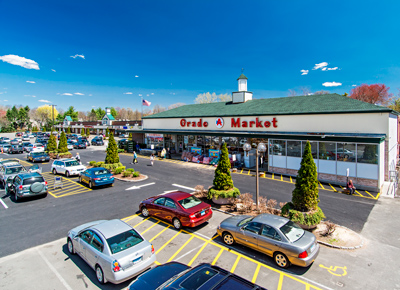 “I’ve always felt that retail has been the most dynamic segment of real estate,” he says, adding, “The issues facing our tenants from online shopping are our biggest challenge.”

However, the company believes savvy retailers who focus on food, basic necessities and services, including supermarkets, warehouse clubs, drugstores, fitness centers, medical facilities, and restaurants, are less susceptible to internet encroachment than other retailers and will not only survive, but thrive. As a result, in recent years, many vacancies have been filled with health services companies, health clubs, and other businesses offering internet-resistant services.

Today, approximately 84% of the company’s 5 million square-foot portfolio is anchored either by supermarkets and warehouse clubs selling a high percentage of food, or drugstores selling prescription drugs and convenience items.

“That’s what we’ve predominantly purchased since 1989, and it has paid off,” Biddle says.

As of October 2019, Urstadt Biddle reported a 93% leased rate, roughly in the middle of its range of occupancy rates over the last 15 years, including during the recession of 2007-2008, and Biddle emphasizes that leasing vacant space is the company’s number-one priority.

Raising capital has been aided by careful management of the REIT’s capital structure. The company recently issued $110 million of 5.875% preferred stock and used the proceeds to redeem $75 million of its 6.75% preferred stock, which will save the company approximately $0.02 annually on a class A Common per-share basis, while providing excess capital for general corporate purposes, acquisitions, and redevelopment.

Biddle says this issuance may have been the first time a non-rated public corporation sold perpetual preferred stock at less than a 6% coupon, which reflects “the quality of our properties, the quality of our management, our low leverage, and our strong track record.”

Meanwhile, acquisitions and redevelopment continue at a robust pace. A former supermarket in Passaic, New Jersey is being converted into two discount retailers, Dollar Tree and Family Dollar. A former A&P supermarket in Wayne, New Jersey is being expanded into a Whole Foods expected to open in 2020. A former Acme supermarket in Eastchester, New York is being remodeled to become a DeCicco & Sons regional grocery, and a newly-acquired vacant property adjacent to Urstadt Biddle’s shopping center in Stratford, Connecticut is being developed to include a self-storage facility, a Starbucks, and a Chipotle.

Given current market conditions, the company also plans to focus intensely in 2020 on the management of its existing portfolio. Biddle says the company will work on “pruning, weeding, chopping dead wood, and fertilizing our portfolio like farmers would their fields, looking to the long-term harvest.”

Urstadt Biddle is a small REIT compared to some large national companies, but Biddle believes this makes it unique.

“While we may be small from a national perspective, we are dominant in our market, which is what enables us to intensely focus on our properties and run them efficiently,” he says. “We’ve always said, ‘Size is vanity—profits are sanity,’ and it is this philosophy that has enabled us to perform as well as we have for our shareholders.”