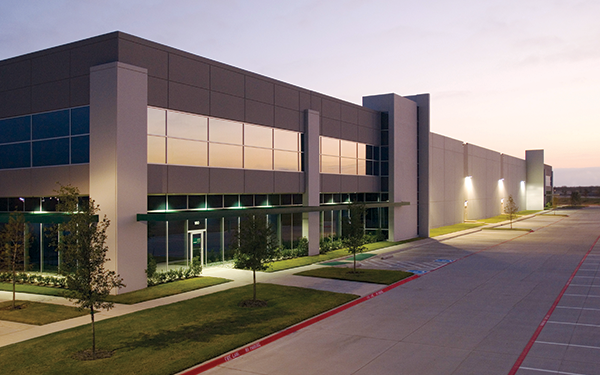 As the U.S. economy gradually recovers from a severe recession and businesses act to meet the rising demand for consumer goods, demand for industrial space has also been slowly on the upswing.

In fact, the fourth quarter of 2012 saw the strongest demand for industrial space in six years, according to research firm Green Street Advisors. That came despite the U.S. economy growing a scant 0.4 percent during the three-month period.

Larry Harmsen, chief operating officer for the Americas division of industrial REIT Prologis (NYSE: PLD), says the sector is finally showing signs of life. “We’ve had a period of three to four years with very limited growth, a lot of uncertainty,” he said. “Companies have been very reluctant to expand and grow and do much of anything. They’re finally starting to do things.”

“We’ve had pretty significant population growth,” he says. “The more bodies we have, the more consumption that occurs and the more stuff that goes in our buildings. Improved gross domestic product clearly helps drive consumption and more flow.”

Harmsen expects marketwide net absorption of industrial space for 2013 to be about 175 million square feet, following net absorption of 125 million square feet for 2012. Boosting demand in this cycle, particularly for big-box spaces of more than 500,000 square feet, are factors such as the recovery in the homebuilding sector, the growth of the e-commerce sector and the reconfiguration of supply chains by some manufacturers.

Furthermore, as companies look to cut costs across their supply chains, some are consolidating warehouse space across two or more facilities into one larger facility. Typically, this kind of consolidation is occurring near large population centers that are global markets, such as Los Angeles, Chicago, Atlanta, the San Francisco Bay area and New Jersey.

“Companies are evaluating factors like expected changes in demand for their products, access to the right labor supply, transportation efficiencies, and proximity to customers and suppliers,” says Peter Schultz, executive vice president with First Industrial Realty Trust (NYSE: FR). “The location and functionality of industrial real estate is an important part of the supply chain equation for any company.”

Most importantly, e-commerce has taken off, with sales of $225.5 billion for 2012, an increase of more than 15 percent from 2011 levels, according to real estate advisory firm Transwestern.

The operations of these online retailers, particularly Amazon.com, have boosted demand for industrial space. For instance, Amazon has taken steps anticipating the collection of state sales and use taxes if and when the Marketplace Fairness Act of 2013, recently passed in the Senate, is passed by the House of Representatives.

"The location and functionality of industrial real estate is an important part of the supply chain equation for any company."
—Peter Shultz, First Industrial Realty Trust

“Historically, [Amazon] had essentially offered customers an 8 percent discount by not charging a sales tax,” explains John Stewart, a senior analyst with Green Street Advisors. “To offset that, they have shifted their business model to offer essentially same-day delivery in almost all major metropolitan areas. So, they have set up huge distribution boxes within a day’s drive of all the major metropolitan areas in the country.”

According to Prologis’ Harmsen, Amazon’s activity accounted for about 30 percent of all U.S. industrial net absorption for 2012.

The growth of e-commerce has brought with it changes to the physical structures required by tenants. E-commerce fulfillment centers typically require taller building heights, more land availability for trailer parking and car parking than standard big-box industrial space, wide truck courts and the space for more building to accommodate additional product storage. First Industrial is taking such factors into account with its new development, according to Schultz.

From the point of view of Prologis, it is no different than building a generic building for any other client, except for what goes inside the building, which is done at the expense of the client. “Amazon and others may come in and put in a conveyor system and a lot of money to mechanize the distribution. And in 10 or 15 years, in the event that they would relocate out of the building, we have a nice generic warehouse building to lease to the next guy,” Harmsen says.

Building with a Purpose

Industrial REITs are being more circumspect in their building activity in the current economic rebound than they have been in the past, according to Evan Smith, an analyst with Cantor Fitzgerald. Instead, they are largely meeting the growth in demand through build-to-suit activity.

“You will occasionally see a speculative building or two coming up in some markets, but for the most part, the appetite for risk isn’t there for a REIT developer,” he says. “There isn’t much spec product today because of the lease-up risk, and at the same time, you are seeing the development pipelines continue to grow with the built-to-suit activity.”

Prologis has been meeting the need for big-box space through build-to-suit projects for clients like Amazon, Speed FC, Home Depot, Pepsi, BMW and Subaru. The REIT is also involved in some speculative building, though, based on demand in specific markets, such as Washington, Miami, Dallas, Houston, Los Angeles and Seattle.

“We look at each of these markets and look at where there is a gap in supply. Oftentimes, that’s in the big-size range,” Harmsen says. “There is very little over 500,000 square feet available. And very few people are building speculatively.”

At the end of the first quarter, Prologis had total space under development of more than 8.6 million square feet.

To pay for the new development, REITs are typically financing the construction activity using lines of credit or the cash they have readily available. First Industrial has been funding new investments through targeted asset sales and freshly raised equity capital.

“Most REITs have in place an at-the-market program to issue equity in the secondary market. By and large they are being pretty disciplined in maintaining relatively flexible balance sheets and raising at least a modest amount of equity,” Stewart says. “They are not strictly levering up to go long development as was the case in the prior cycle.”

Supply Keeping Up with Demand

According to Green Street Advisors, net absorption of space in the U.S industrial sector, has been moving up recently, after declining in 2008 and 2009. While Green Street anticipates that net absorption, as a percentage of stock, for 2013 will be less than 1 percent, the firm expects it to exceed 1 percent in 2014.

Even though this is not robust, additional supply coming on line is also tempered. Green Street Advisors’ forecast calls for a 0.8 percent addition to supply for 2013, increasing to additional supply of 1.3 percent in 2014. The research firm reports that U.S industrial REITs have a total investment of more than $2.9 billion in their U.S development pipelines, including $524 million from Duke Realty Corp. (NYSE: DRE), $316 million from Liberty Property Trust (NYSE: LRY) and about $550 million from Prologis.

“Before the downturn, we were experiencing 150 million square feet per year of new development, most of which was speculative,” Harmsen says. “It is just a fraction of what the historical average has been. So there’s a nice window of opportunity in many markets.”

While the outlook for the industrial sector is better than it has been for the last few years with e-commerce growth serving as a tailwind, recent government spending cuts could negatively affect the sector. Analysts note that they haven’t seen any material impact from the cutbacks yet.

Ultimately, though, it all comes down to sustaining economic growth, according to Smith of Cantor Fitzgerald.

“It all depends on whether you are a bull or a bear on the economy. If you think we’re in a long-term, slow-growth recovery and GDP should continue to eke out gains over the next couple of years, we should continue to see increasing demand,” he says. “If you are bearish and think that we’re going to go into a recession, I would think that demand is going to decrease. But we’re not in that camp.”