Parkway Ready for the Next Challenge 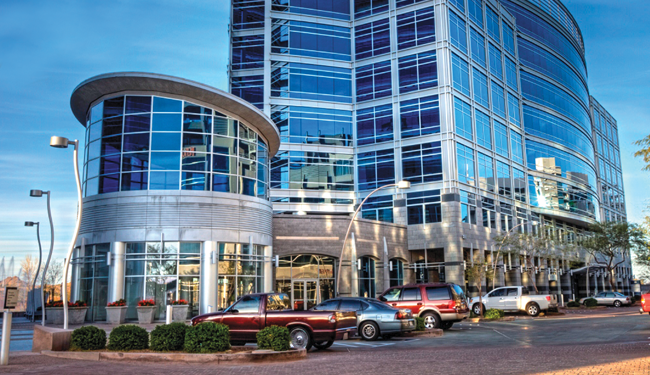 Two years ago, Parkway Properties (NYSE: PKY), which owns offices in the Southeast and the Southwest, struggled with the seemingly unending repercussions of the recession. Steven Rogers, president and CEO of Parkway at the time, knew the company was in need of a makeover, and in May 2011, he started Parkway on its path to recovery by merging with Eola Capital, an office investment firm founded by Jim Heistand.

Today, Heistand, who’s now the president and CEO of Parkway, says the wisdom of that move is being borne out.

“As a result of our recent strategy we’re one of the best performing REITs around,” he says. “All our metrics have materially improved, and the perception of Parkway has turned positive.”

“We picked markets that were expected to outperform others in terms of job growth and the local economy, then picked the submarkets that would perform best in those cities and purchased assets to gain critical scale in those areas,” Heistand says.

Alexander Goldfarb, managing director and senior REIT analyst for Sandler O’Neill + Partners, calls Parkway’s turnaround “a great story, especially when you go back to the ’80s and ’90s, when the Sun Belt was like the wild west of development.”

Goldfarb says Sun Belt cities used to have no barriers to supply, with “cornfields” in prime locations that could be purchased and developed into office space. Today, he says, those cornfields are gone, the towns have gotten stricter about development and most of the developers are gone.

“Rents are still 15 to 20 percent below where it makes sense to build anything new,” says Goldfarb, which means that Parkway’s assets can become even more valuable.

Parkway, which started in 1971 under the name Texas First Mortgage REIT, converted to a Texas corporation known as The Parkway Co. in 1981 and then was reincorporated as a REIT known as Parkway Properties in 1996. In 2011, Parkway Properties needed revitalization, says Richard Anderson, managing director of BMO Capital Markets Corp.

“Parkway was overleveraged with a lot of assets that were a money drain,” Anderson says.

Brendan Maiorana, an equity research analyst with Wells Fargo Securities, says Parkway owned challenged assets in challenged markets in 2011. Its leaders knew that their operations were struggling more than they had anticipated.

The answers to those problems turned out to be a merger.

Reflecting on the Parkway-Eola union, Heistand maintains that the deal worked because it was a merger of “like-minded” firms.

“Parkway Properties and Eola both owned around 13 million square feet of office space in similar markets and similar asset classes,” Heistand says. “The problem Parkway had at the time was that it had primarily invested in secondary and tertiary markets in places like Memphis, Richmond, Jackson and Columbia. When economic problems hit, those tertiary markets were hit a lot harder than others and the capital costs relative to rent just didn’t make sense anymore.”

In September 2011, Heistand took over as president and CEO along with a new senior management team comprised of both Parkway and Eola executives. Maiorana says it was easier for Heistand to make the needed changes to Parkway’s portfolio than it had been for Parkway’s legacy management team.

The first step was to quickly sell Parkway’s lower-quality assets in low-performing markets. The company sold $150 million worth of assets within a few months of Heistand taking over.

“My view was to do it quickly and put it behind us,” he says. After selling assets, Heistand says he was ready to take Parkway to the next level.

“The problem was that our asset sales were just used to deleverage, and we didn’t have much cash left to acquire the kind of properties we wanted,” he says. “Our investment strategy was to reduce the number of our markets to six or seven in the Sun Belt and to get critical scale there.”

To acquire the needed cash, Parkway took a $200 million investment from TPG Capital in May 2012.

“Parkway got a 43 percent increase in equity and that put them on the map,” says John Guinee, managing director with Stifel Nicolaus & Co. “They used that cash to acquire good buildings in good submarkets at a big discount, a strategy that has been regarded on the Street as astute.”

Anderson agrees that bringing in TPG was a key turning point for Parkway, although it initially angered a lot of shareholders.

“Parkway sold 43 percent of its shares to TPG, but that move shored up its balance sheet,” Anderson says. “It turned out well for those shareholders who stuck around. In my view, the management team executed an appropriate level of aggressive activity.”

Maiorana says that while bringing in TPG was controversial at first, by the summer and fall of 2012, investors had become more comfortable with the idea that Parkway’s asset values and fundamentals were improving.

-The Pointe and Westshore Corporate Center in Tampa

-The Deerwood Portfolio in Jacksonville

“It started to look like a good move to raise capital and then make more investments in core markets,” Maiorana says.

After Parkway sold its assets in tertiary markets, the company began to acquire high-quality assets in targeted submarkets such as Tempe in Phoenix, Buckhead in Atlanta, Westshore in Tampa, Deerwood in Jacksonville and Charlotte’s central business district. Heistand says the markets they chose were identified as places where the supply-and-demand dynamics were expected to be more favorable than other markets.

Also, he says there was no dominant office REIT in the Sun Belt, so “we want to be it.” That prompted Parkway to focus on making sure it had boots on the ground in its target markets.

“In each of our markets we have senior regional people who are from the area to act as our eyes and ears on the ground,” Heistand says. “This has helped us in terms of investment decisions, and because of our presence on the ground, we were able to source a lot of acquisitions off-market.”

Every deal Parkway has done since the merger matches perfectly with its strategy, Goldfarb says.

“In the South you have markets with lots of economic and job growth because they have pro-business governments and low taxes,” he says. “Companies in the Sun Belt want offices in nice submarkets, and Parkway is meeting that demand.”

For example, in Charlotte, the general view when the financial crisis began was that the local economy would be damaged because of the financial services companies there, according to Goldfarb.

“Instead, we’re seeing Bank of America and Wells Fargo and other banks moving there and consolidating more of their employees there,” he points out.

Parkway bought the Bank of America tower in Charlotte, which has 1 million square feet of space, in June 2012.

“Nationwide, Bank of America has been consolidating elsewhere, but they’re expanding in Charlotte,” Heistand says. “Lots of operations and consolidations that have been negative in other parts of the country are a net plus to the markets we’re in.”

“Parkway identified opportunities where they could buy assets at 60 or 70 cents to the dollar,” Anderson says. “They made a lot of attractive investments that brought good returns relative to their cost of capital. Sometimes they opportunistically bought under-occupied buildings and applied their management experience to increase occupancy, while other times they bought core assets that were fully occupied.”

Another component of Parkway’s strategy has been to proactively reach out to buildings near properties that it already owns to achieve greater scale. Parkway has also made a few land purchases.

“We’re not developers at all, but in a couple of places, we’ve purchased a pad or intend to purchase a pad adjacent to our properties in case one of our tenants wants to expand,” Heistand says.

Two markets that Parkway is targeting for future acquisitions are South Florida and Austin, where Heistand says the fundamentals are good for future growth.

Goldfarb sounds bullish on Parkway going forward, thanks in part to the firm’s efforts to recapitalize.

“These guys are in the catbird seat,” Goldfarb says. “People know them and know they have a good balance sheet and that they’re raising new equity.”

“The headwinds we face come from competition with other companies who want to buy similar assets now that that there’s some consensus that the markets we’re in are recovering,” Heistand says. “But the tailwinds are the perception of Parkway as a company that people want to deal with, a company that’s reliable and has the ability to get things done.”

Maiorana indicates that he expects Parkway’s positive performance to continue.

“We expect Parkway to have better rent growth and better occupancy than their peers in Sun Belt markets,” Maiorana says. “They have a better concentration of assets in their submarkets than they did before and a higher quality of assets, so we expect better performance growth going forward.”

“The near-term challenge for Parkway is leasing up the space they’ve acquired,” Goldfarb says. “On the positive side, they should be able to raise capital going forward. It’s a great company.”

Heistand says that with the help of the TPG investment, Parkway sold off $800 million in assets and then purchased $1.5 billion of higher-quality assets.

“From May 2012 until now we’ve raised more than $600 million in capital and taken Parkway from a $200 million equity market cap when I came on board to a $1.3 billion market cap today,” Heistand says.

Furthermore, Heistand notes that Parkway’s metrics have dramatically improved over the past 12 to 18 months. Parkway has doubled its dividend twice in that period and the share price, which was around $9.50 when Parkway and Eola merged, recently went up to $17.25.

“It was dark early on, but now we have access to capital, and people know we can deliver,” Heistand says.

One of Parkway’s new goals is to earn a credit rating.

“Given all the changes we’ve made, this could be sooner than we thought a year ago,” Heistand says. “We’re in a position to earn a credit rating within the next 12 months.”

Some of the changes Heistand points to include the fact that they raised $200 million from TPG and another $184 million through a public, underwritten equity offer. Net debt to EBITDA was reduced from 6.2 times at the end of 2011 to 4.2 times by the end of 2012.

“There’s been a material change in the company,” Heistand says.

Anderson says a credit rating for Parkway may not be imminent, but he believes it’s achievable.

“The management team has done heroic things to save the company, and its past problems are now a distant memory,” he says.