Twenty-five years after the first REITs emerged as a solution to the collapse of Canada’s real estate market, the country’s REIT industry continues to evolve as new investment opportunities emerge.

Canada’s REIT industry has come a long way in a relatively short time. In 1996, there were five publicly traded REITs on the Toronto Stock Exchange. Today, there are 38, according to REALpac, a Canadian real estate industry trade group that has 96 members comprised of both REITs and pension funds, lenders, banks, and brokerages.

Unlike their REIT counterparts in the United States, which were created by Congress in 1960, Canadian REITs didn’t exist until 1993.

In the wake of a crippling economic downturn, Canada’s “open-end” real estate mutual funds found themselves facing a rush of investors who were cashing in their units, or shares. To finance the redemptions, mutual funds were forced to sell their properties in a depressed market, often below appraised values. Ultimately, the mutual funds got permission from Canadian regulators to suspend redemptions and evaluate other options. 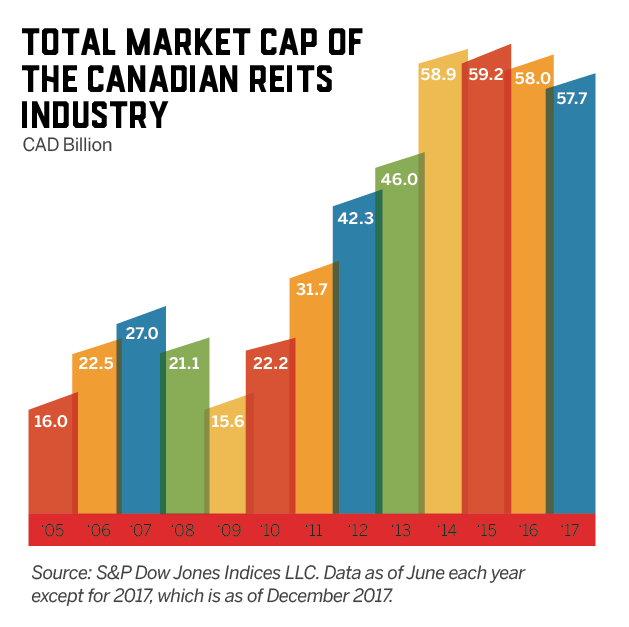 That’s when the Canadian government amended finance legislation to create a new generation of “closed-end” real estate-focused funds that didn’t have redemption rights. Instead, those vehicles could be publicly traded, giving investors an alternative source of liquidity.

“That was the genesis of our industry. It came out of a crisis,” says Michael Brooks, CEO of REALPAC, which backed the legislation that ultimately led to the creation of Canada’s REITs.

In the early days, Canada’s REITs had an unsteady ride. From 1998 to 2000, as technology stocks took center stage, Canada’s REITs traded at a discount. Then, the tech bubble burst, leaving investors scouring for companies with assets that were tangible. That led Canada’s investors to REITs. Since then, REITs have taken off, becoming a widely accepted investment vehicle in Canada.

As the real estate industry has evolved, the Canadian REIT industry’s total market capitalization has risen, from about C$16 billion ($12.5 billion) in 2005 to hover just shy of C$60 billion ($46.8 billion) for the past four years, according to statistics from S&P Dow Jones Indices LLC that were released in March.

5 percent to 6 percent in the second quarter as consolidation removes some players from the public market, according to RBC Capital Markets in its April industry report.

“I think that there is a lot of good growth within the existing Canadian REITs. I just think we’re in a slow growth phase. If you talk to the CEOs, they’ll tell you about their development pipeline and how much extra land they’ve got and how rents are going up in almost every asset class. So, I think there will be internal growth to reverse the trend,” Brooks says.

Looking at a longer timeline, Canada’s REITs have outperformed both the equities and fixed income asset classes on an annualized return basis during the 20-year period from July 1996 to December 2017, S&P Dow Jones points out. 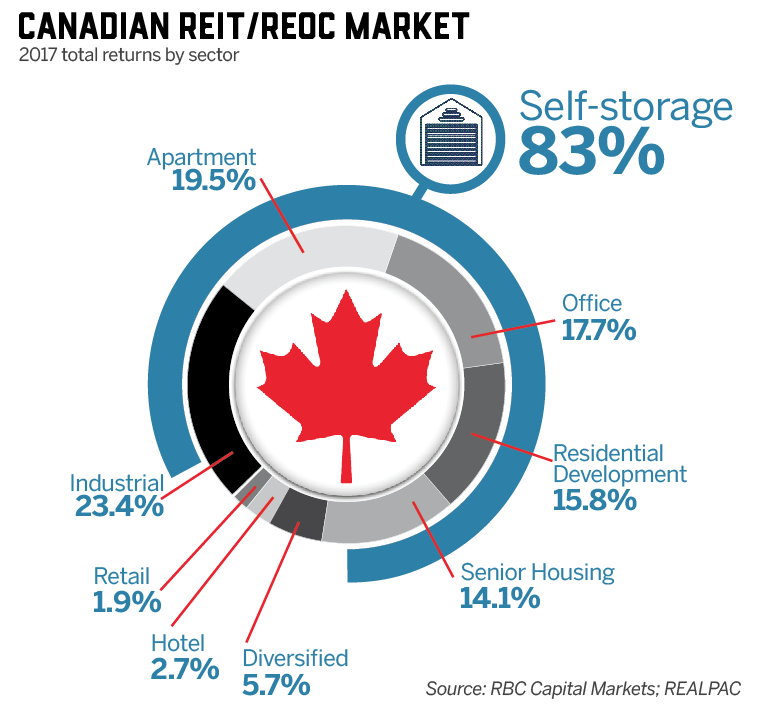 “Despite higher returns, the risk over the test period was similar to that of equities,” according to Smita Chirputkar, S&P Dow Jones director, global research and design.

In 2017, the S&P/TSX Canadian Real Estate Index delivered a total return of 11.2 percent, outperforming the S&P/TSX Composite Index at 9.1 percent and Government of Canada 10-year bonds, which dropped 0.01 percent, according to a January report from GMP Equity Research. During that period, Canada’s REITs also outperformed REITs trading in the U.S., Europe and Asia, the company said.

REITs in Canada bear many similarities to their counterparts in the U.S. They are required to distribute all their earnings to unit holders to not be subject to corporate-level tax, rather than plow profits back into the business. That means that REIT executives might think twice about “aggressively bidding on certain types of assets that have a much lower yield,” Brooks says.

Bob Dhillon, founder and CEO of the publicly held Calgary-based Mainstreet Equity Corp., highlights the similarities between Canadian REITs and their southern neighbors: “Our real estate looks the same, our legal system is all the same. There’s a lot of cross-over from investments, cross-over from banking and interest rates are usually in sync. If the U.S. booms, we do well. If the U.S. gets a cold, we catch pneumonia.”

There are also plenty of differences, however, particularly when it comes to specialization. REITs in the U.S. “have a lot of these niche property types, like student housing and self-storage and data centers. They’ve burgeoned significantly the last several years,” says Paul Meierdierck, who covers Canada’s listed equity REIT market with LaSalle Investment Management Securities in Baltimore.

But, Meierdierck says, due to Canada’s smaller population, specialized REITs there “haven’t taken off to the same degree. The evolution has actually gone the other way, toward…more diversified property holdings, but concentrating more in desirable markets.” 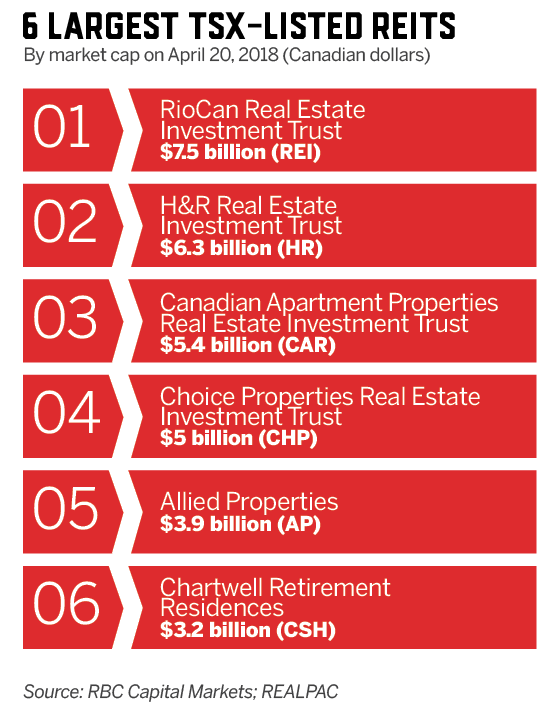 Yet RioCan is also pushing into the residential market as some of its retail tenants have struggled or closed, including Sears Canada. The REIT is now developing its first condos and apartments, which are located near its retail centers or along prominent transit lines in Toronto, Ottawa and Calgary.

While Canada’s REIT industry has made great strides, challenges persist. “I think the main concern is how to grow, how to find accretive purchases, when their unit yields are now trading fairly high.  In a competitive market and with a high yield, some of the Canadian REITs find that they’re uncompetitive,” Brooks says.

Another issue nagging the industry is the likelihood that interest rates will rise. “The specter of higher interest rates may spook some investors into sitting on the sidelines, versus holding REIT stock, thinking that the REIT stock will go down if interest rates go up. I think that’s an issue on both sides of the border,” Brooks observes.