Business Strategies from Sally Helgesen for Women on the Rise

Sally Helgesen has been a best-selling author, speaker, coach, and expert on women’s leadership for over 30 years. Her mission has always been to help women recognize, articulate, and act on their greatest strengths and inspire organizations to build more inclusive cultures. REIT magazine recently spoke with Helgesen about her best-selling book, “How Women Rise,” and thoughts on factors holding female executives back.

Your latest book, How Women Rise, refers to certain habits that hold women back from getting raises, promotions, and new jobs. What are some of these habits and how can they be identified?

One of those behaviors that stands out is over-valuing expertise. This is the belief that many women have that becoming a real master or domain expert in whatever their job is will alone position them to thrive.

The problem with this kind of thinking is that it doesn’t necessarily get you to that promotion you might think you are working toward. Your ability to be recognized as an expert in your career is always great, but we’ve found a successful career over time is built on three legs. One is definitely domain expertise, which I would define as the diligent application of power. Another is connections and your network, and the third is recognition.

Women also tend to feel that until they are completely ready for that big promotion or career change, they aren’t willing to go to the next level, which can definitely hold them back from rising. I also want to make it clear here that the habits that we talk about in the book aren’t necessarily bad things. In fact, they often serve women very well earlier in their careers.

What are some indicators that a person might be stuck in some of these habits?

One sign to look out for is staying in a position longer than some of your colleagues do. Another sign might be, say, when you are having a performance review with your supervisor and you realize in those discussions that something that you believe you are contributing to the organization isn’t necessarily being recognized or appreciated.

You then find yourself in the position of not representing what your full value to the organization is, which can keep you stuck. A third sign is when you see people that aren’t necessarily contributing at the level you are, but they are getting promoted ahead of you nonetheless.

What can someone do to get themselves unstuck? 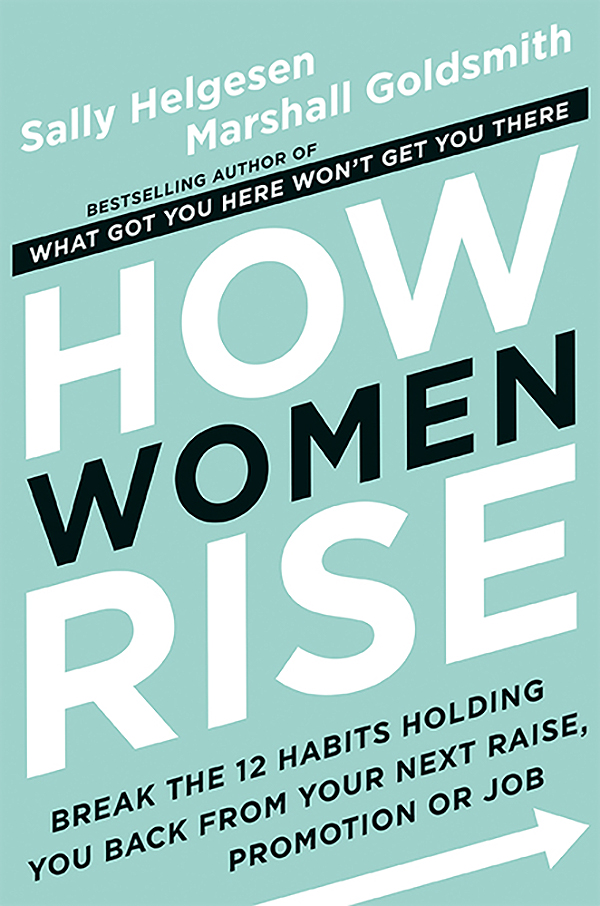 In the book, we offer proven steps to take to get unstuck. These steps can feel awkward at first. Women specifically tend to be hard on themselves. But try to identify at least one behavior, or even one part, that you believe isn’t getting you where you want to be. Bring it to your conscious awareness and then try out different responses.

At first it can make you feel vulnerable and exposed, but we’ve seen it work thousands of times; where if you can change your responses over time, you can change the habits that are holding you back. It can unleash power, energy, and confidence you might not have known you had within you. This in turn can make it easier to develop and sustain long term success.

Also consider working with a career coach, or just enlist other people to share your goals and ideas with. People generally love to assist in those kinds of endeavors.

Can you provide an example of how a limiting behavior might be turned into a strength?

For example, women tend to try for perfection all the time; to be perfect at everything. But we found very interesting research from our coaching that indicates that seeking perfection can lead people to being micromanagers within organizations. We’ve found that initially women tend to be promoted on this premise and then often their career development collapses further up the chain.

In other words, women can be perceived as people who are good with detail but not focused on the big picture. I’ve seen where this limiting behavior of perfectionism and attention to detail can become a strength, which is when women can use those habits to their advantage but adapt to be big-picture thinkers too.

You mention there are four kinds of power in most organizations. What are those powers and how can they be used?

Yes, these are the powers of expertise, connections, personal authority, and what we call the power of position, or where you stand in an organization. As mentioned, cultivating expertise is required for success in any knowledge-based organization. But to the point where you do so at the expense of the other kinds of power, well, this can end up being detrimental to long-term growth as a leader.

The power of connections is really harnessing the power of whom you know. Getting to know people in your industry, key clients, and movers and shakers is paramount to personal growth and expanding your own optics so that you can rise. Your connections can be used as a personal currency to assure your contributions are getting noticed both internally and externally.

Lastly, personal authority is just another term for charisma and your ability to inspire and motivate others, which are extremely important characteristics as your reputation develops over time. The fourth is the power of position or where you stand in the organization. We often quote Peter Drucker who observed that, “the decision is always made by the person with the power to make the decision.”

What are some techniques that we can all employ right now to become more successful, fulfilled, or even make that big career change?

Start by asking questions like: What would be required to get to where I want to be? Who do I need to know to help get me there? Who is successful in what I’m trying to accomplish?

Start talking about it with people who are successful in what you are trying to do, but who are also supportive and care about your success. I see so many women who are reluctant to do this, but I think it gets back to acknowledging what your intentions are and what would bring you fulfillment. Then you have to get in the habit of talking about where you want to go; and talking about it clearly and concisely with the ability to express what you want.