Opportunity zone legislation has the potential to impact REITs in a number of direct and indirect ways.

New “opportunity zone” legislation has sparked a frenzy of excitement across the commercial real estate industry among investors, including REITs, that are hoping to grab a share of what some say could be a multi-billion-dollar market.

Opportunity zones are an economic development tool created by the law known as the Tax Cut & Jobs Act of 2017, which use the incentive of a deferral or elimination of capital gains recognition to spur private capital investment in economically-distressed communities.

Sponsors came out of the gate quickly, structuring investment vehicles that would allow them to start raising capital soon after the program was introduced. The second round of Treasury Department guidelines, released in April, provided much needed clarity and has further accelerated activity.

“From an overall real estate industry perspective, folks are generally excited about what opportunities have been created through the opportunity zone legislation,” says Tim Bodner, leader of U.S. Real Estate Deals and Capital Markets & Accounting Advisory Services at PwC.

Potentially, there are a number of ways that REITs could be directly or indirectly impacted by opportunity zones, including the emergence of a new niche category of opportunity zone REITs. Two non-traded REITs—Belpointe REIT and SkyBridge Opportunity Zone REIT—launched in the past six months, and there could be more to follow. Established REITs are also looking at ways to utilize the tax benefits as an opportunity zone investor or leveraging existing portfolio assets that may by located within a qualified opportunity zone (QOZ).

In addition, REITs are keeping an eye on the ripple effects caused by a surge in opportunity zone investing. Treasury Secretary Steven Mnuchin has said publicly that he expects the program to drive $100 billion in capital into QOZs.

“If that happens, there are some in the industry who believe a lot of that activity will be focused on the multifamily sector,” Bodner says. New development could bring added supply and competition that could create operational risk for some multifamily REITs, he adds. 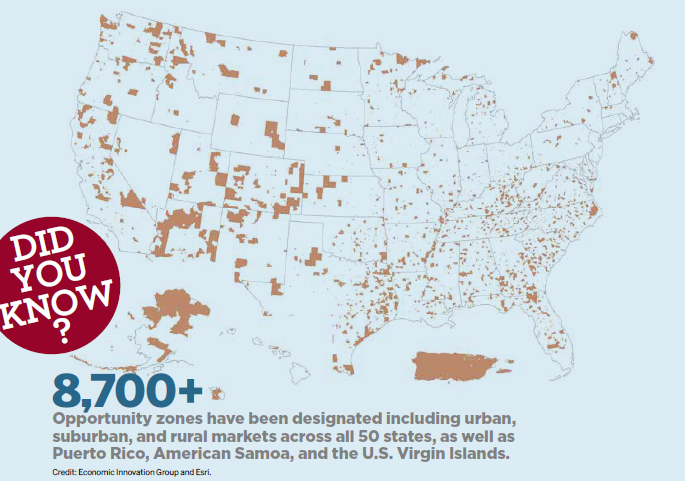 Broadly speaking, REITs and other companies are looking at the tax advantages of opportunity zones from an investor’s perspective.

Some tax experts believe that investment in a QOZ entity offers an attractive alternative to 1031 exchanges. There are times when it is difficult to identify a replacement property, and a 1031 exchange may not always work, notes Gerald Thomas II, a partner at McGuireWoods and chair of the firm’s tax and employee benefits practice. “When you look at the sheer depth and breadth of these opportunity zones across the country it puts a lot of real estate in play for these investments,” Thomas says.

It may be too soon to determine the extent that opportunity zones might be used in lieu of a 1031 exchange to defer capital gains taxes. “I think there is less likelihood to be a whole lot of activity from REITs using opportunity zones as a deferral for their own capital gain, because REITs can use 1031 exchanges for real estate where they can defer any gain indefinitely by reinvesting in other real estate,” says Jay Blaivas, a partner in the federal tax group at Morrison & Foerster. There also are some concerns on what the treatment would be for REIT shareholders if the REIT did defer gains and whether those benefits would get passed on to shareholders, he adds.

Investors looking to participate in opportunity zones in some way are facing a ticking clock. There are a number of deadlines built into the program that dictate when capital has to be invested and for how long.

Dec. 31, 2026
The end date for the tax deferral. Theoretically, investors could invest in a QOZ fund up until that date. However, the deferral advantages obviously diminish the closer it is to that date.

All investors who keep their capital invested for a minimum of 10 years are eligible for a tax exclusion on any appreciation generated by the new investment regardless of when they invested the capital. “I think that’s what people really view as the biggest benefit of opportunity zone funds,” says Jay Blaivas, a partner at Morrison & Foerster.

The way the opportunity zone tax law is written, investors can defer and reduce the amount of tax on the original capital gain, as well as avoid capital gains tax on appreciation generated in the new investment, if they keep their money invested for 10 years. So, from a tax perspective, opportunity zone investments would offer more tax savings as compared to a 1031 exchange. However, the investment would have to appreciate in order for investors to realize that added benefit.

“REITs may be able to realize a deferral more easily than trying to make it work with a like-kind exchange program,” Thomas says. “The problem with opportunity zones is that they are still so new that we’re still trying to work out the kinks in terms of the ambiguity of some of the rules and how they might work with REITs.” So, REITs are proceeding cautiously to make sure REIT rules match up with opportunity zone rules, he adds.

It remains to be seen whether REITs will play a meaningful role in establishing investment entities. SkyBridge Opportunity Zone REIT, which launched in December, is structured as a private, non-traded REIT available to accredited investors. Belpointe Asset Management, which officially launched its public, non-traded Belpointe REIT in March, had a head start. The company was already down the path of filing papers with the SEC when the opportunity zone legislation was introduced.

“We decided that if we married the opportunity zone with our unique REIT structure, we had something that was even more unique,” says Brandon Lacoff, president and CEO of both Belpointe Asset Management and Belpointe REIT.

Its leadership team consists of former executives from AvalonBay Communities, Inc. (NYSE: AVB), which has guided the company’s primary focus toward investment in residential properties that include multifamily, and potentially senior housing and student housing projects. The goal at Belpointe is to make good investments that also just happen to be located in opportunity zones that allow shareholders to get the maximum tax benefits. “This is something that is not new to us, and our business model is not changing from what we have done in the past,” says Lacoff.

So far, the vast majority of QOZ funds—an estimated 200—are adopting some type of partnership structure. REITs face the added challenge of having to maneuver within the confines of REIT rules, whereas partnership structures are often easier to manage and more flexible.

“When you reinvest the capital gain in a fund or a REIT, your basis or equity in that stock on day one is effectively zero. So, if you want to do certain things, like debt finance distributions where you take the embedded value out of a fund and distribute it, you can’t really do that in a REIT structure, but you can do it in a fund or partnership structure,” Bodner says. “So, for that reason, along with some others, we see folks gravitating more toward funds structured as partnerships than REITs”

One of the benefits that opportunity zone REITs offer to investors is a simpler structure. For example, investors would get a 1099 every year versus a K-1 schedule. “Especially for less sophisticated investors who are not interested in receiving a K-1 from a fund that they invest in, because it  just makes it more complicated to do their taxes,” Blaivas adds. The structure of a public REIT also comes with liquidity that makes it easier for individual investors to exit, especially if they need to get their money out ahead of the designated hold period, he adds.

Regardless of the structure, opportunity zone sponsors appear to be racing full speed ahead. The program has baked in some hard deadlines that are spurring investment activity. Investors who want to maximize the full tax advantages need to place capital in a QOZ investment vehicle by the end of this year. The guidance issued by the Treasury Department in April helped clear the path for both investors and sponsors to move forward, and there is likely to be some further refinement to rules that are released this summer.

“Once we get the regulations finalized, I think we will really start to see how much activity flows into the program,” Bodner says.

Cedar Realty in the Zones

Opportunity zones represent a unique opportunity for Cedar Realty Trust, Inc. (NYSE: CDR). The grocery-anchored shopping center REIT has an investment focus on high-density, urban submarkets located in the Washington, D.C. to Boston corridor. The introduction of opportunity zones highlights the message that the company is endeavoring to “do well” by generating returns for investors, while also “doing good” in terms of having a positive impact on communities, says Bruce Schanzer, president and CEO.

Cedar Realty has two existing properties located in QOZs, its Fishtown Crossing shopping center in Philadelphia and its Northeast Heights redevelopment in Washington, D.C. “As a real estate investor and operator, this has turned out to be a real advantage for us in terms of the ability to dramatically improve the value of the real estate that we own there, and to be able to draw very attractively priced capital to the project,” Schanzer says.

Notably, Northeast Heights is a major, multi-phase redevelopment project that will likely take five to seven years to complete. The master plan for what is estimated to be a $100 million-plus project includes the creation of more than 200,000 square feet of retail space, 100,000 square feet of office, and more than 1,000 residential units. Cedar Realty has already seen a surge of inquiries from funds and high net worth individuals who are reaching out to discuss the possibility of participating in some facet of the Washington, D.C. project. Likely, that would materialize as some type of co-invest structure, Schanzer says.