Aside from any debate about how carbon emissions affect global temperatures, it’s clear that hurricanes, other storms, and fires have been  hitting the United States and elsewhere with an increasing frequency and intensity, leaving ever more costly cleanups and restorations. Storms have deluged major cities such as Houston and New York, mammoth fires have burned in the West, and this past winter, a polar vortex slipped down from the Arctic, plunging a big swath of the nation into record-breaking freezing temperatures.

These events have all had consequences in terms of human life and economic strain. The mounting costs are starting to motivate investors to demand more accounting by companies on how much risk they face with regard to climate-related events, and more information about what they plan to do about it. In other words, how resilient is a company to climate change?

Over the years, many REITs have successfully achieved LEED green-building certifications, reduced carbon emissions, measured utility use, and increased utilization of renewable energy sources. However, there is morework to be done in terms of communicating to investors in this new era of rising climate-risk awareness.

“The effort for a long time was focused on mitigation,” says Ben Myers, director of sustainability at Boston Properties, Inc. (NYSE: BXP). “Now there is compelling evidence supporting the case for proactively adapting for a changing climate. We should anticipate the risks associated with sea level rise, severe storms, and heat. We need to be prepared to manage the impacts of these events.”

As part of that future-proofing, the task before REITs and other companies is to come up with a way to communicate the true risk of their portfolios. The GRESB environmental, social, and governance (ESG) real estate assessment now includes a resiliency module. In addition, the Task Force on Climate-Related Financial Disclosures (TCFD) released recommendations in 2017, encouraging companies to disclose climate-related financial risk as they would other risks. It’s a challenging task, since REITs need to figure out how to disclose “what if” scenarios. Yet it will be important for REITs to get ahead of the curve in the coming years, as climate change risk is already one of the key environmental performance indicators tracked by the ESG reporting frameworks, according to Nareit’s Guide to ESG Reporting Frameworks published earlier this year.

“It’s important for REITs to control the narrative around climate change,” says Sara Neff, senior vice president for sustainability at Kilroy Realty Corp. (NYSE: KRC). “These questions are getting asked, and they are getting asked quite quickly. If you are not getting ahead of it, and defining your narrative, then someone else is going to define your narrative, and it is likely not going to be good.”

In fact, climate change is already showing up in the form of the real estate pricing, according to a study by Four Twenty Seven and GeoPhy, which examined 73,500 properties owned by 321 global listed REITs.

About 35% of REIT properties are exposed to climate hazards such as inland flood risk, coastal floods and sea-level rise, and hurricanes and typhoons. Properties exposed to sea-level rise are selling at a 7% discount, the report notes. The discount includes accounting for higher capital expenditures to protect the properties, greater insurance premiums, more repair costs, and business disruption. All told, the discount is likely too low, notes Nils Kok, chief economist for GeoPhy, a firm that measures property valuations.

In another study, BlackRock looked at how CMBS loans performed in the wake of Hurricane Harvey, a Category 4 storm that dropped more than 40 inches of rain over some parts of Houston over a four-day period in August 2017. The resulting damage affected more than 1,300 CMBS loans, roughly 3% of the market as of late 2017, BlackRock noted in its research. About 80% of the commercial properties impacted by Harvey and Hurricane Irma—which hit Florida a month later—were outside of official flood zone maps, indicating they may have had inadequate insurance, the report noted. “These risks are present, and investors are not really thinking about it and fully appreciating that in their investment decisions,” says Andre Bertolotti, head of global sustainable research and data at BlackRock.

While future financial impact is hard to quantify, Kok adds that real estate owners need to prepare for at least an indirect impact to the bottom line. An extreme  example, Pacific Gas & Electric Co. was found to be responsible for the cause of the 2018 Camp Fire, the deadliest and most destructive wildfire in California history, due to downed transmission wires. PG&E, just two months after the fire, filed for bankruptcy. Citing billions of dollars in liability and mass litigation, PG&E saw quickly that its ability to compensate those affected will be limited, leaving ratepayers and taxpayers to eventually foot the rest of the bill.

That eventually will filter down to real estate owners and tenants. So will all other sorts of consequences from disasters, including mitigation efforts, says Kok. “Whether it’s the utility, a local municipality, or the company itself, the cost of resiliency measures, and the bills on adaptation measures, will be footed by property owners or their respective tenants,” he says. “At the end of the day, it’s a zero-sum game.”

The greatest cost of all might be social-related. Things could get worse as sea levels rise, notes Kevin Hagen, vice president of ESG strategy at Iron Mountain Inc. (NYSE: IRM). “What happens when 100 million Bengalis have to leave Bangladesh because it’s under water?” he says. “The social ramifications of climate impact are another category of concerns from a business point of view.”

Some REITs are already starting to incorporate resiliency measures into their development projects. Boston Properties placed critical equipment 32 feet above grade for its Dock 72 office building at the Brooklyn Naval Yard, which sits on the East River in New York. Its onsite generators also provide 1,500 kW of emergency power.

It isn’t only new development projects as REITs are also building resiliency into their existing portfolios. Flood barriers are one method. At its Atlantic Wharf building, situated on a channel off Boston Harbor, Boston Properties stores panels on site that can be linked together to form a flood protection barrier. 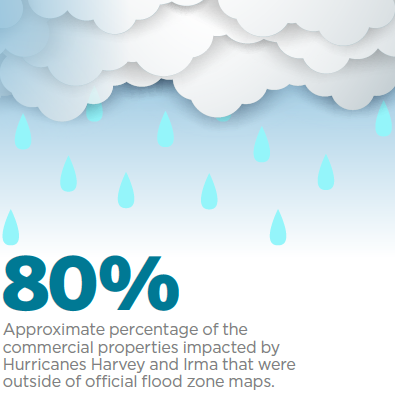 “With climate risks continuing to impact the real estate sector, it is critical for building owners to understand and mitigate the risks their properties face to protect occupants and minimize property and financial damage,” says Daniele Horton, founder and president of Verdani Partners.

Much of the heavy lifting lies ahead in terms of better specifying climate change risk. At this point, those REITs that do mention climate risk on their annual 10-K filings discuss how it could affect the bottom line, but not in terms of potential outcomes. The TCFD’s recommendation to use scenario analysis in disclosure of climate-related financial risks and opportunities aims to get companies to list and describe how an organization is positioning itself.

“It is not a straightforward calculation,” Myers says. “Even at the asset level it can be subjective. At the portfolio level, we are trying to evaluate scenarios in a scientific and defensible way. As of yet, there is not a clear standard or established best practice for the real estate industry.”

For now, REITs that report on scenarios typically spell them out in a qualitative way. Hannon Armstrong Sustainable Infrastructure Capital, Inc. (NYSE: HASI), for example, has included potential impacts from two scenarios in its most recent sustainability report. One is for global action being taken to limit the global temperature increase to 1.5 degrees Celsius above pre-industrial levels beginning in 2020—a goal set by the Paris Agreement. A second scenario addresses an increase of more than 2 degrees.

It’s still early days, Neff notes, since there’s no available software that can adequately map out how resilient properties are in terms of location. This is because software on the market can’t yet account for variables such as how well a staff is trained for events such as storms and fires, and how well-stocked a site is with emergency supplies.

To that end, GRESB has come out with a resilience module for REITs to use. The module follows TCFD recommendations on transition risk, a set of vulnerabilities related to the ongoing shift to a low carbon economy, and physical risk, which includes discussion of possible shocks and stresses. “As institutional investors increasingly recognize the materiality of these broader portfolio risks, REITs are expected to be more sophisticated and accountable on their operational approach to risk management,” remarks Dan Winters, GRESB head of Americas.

Going forward, climate change adaptation looks to be a big business. For instance, Hannon Armstrong has financed $7 million in stormwater systems over four locations in 2018. “As we start to look at 100-year storms happening much more frequently, it became obvious that investing in resiliency and adaptation in addition to mitigation is potentially quite a large opportunity,” says Jeffrey Eckel, chairman, president, and CEO.

There’s no doubt also an opportunity for equity REITs. Investors see climate change as the best opportunity to generate alpha in the last two decades, Neff notes. “There’s this vast difference in impact on value between real estate companies who have thought about it and are protecting their assets, and those that haven’t,” Neff says.

To not invest is penny wise, pound foolish. The cost of meeting the most ambitious climate target of a 1.5 celsius increase over pre-industrial levels would be about $500 billion over the next 30 years, but would save $30 trillion in damage, according to Marshall Burke, an assistant professor at Stanford University.

In a sense, resiliency can be perceived as a liability, but also a chance for REITs to differentiate themselves. “Resiliency is important to us and is increasingly important to our current tenants and potential tenants,” Myers says. “This is an issue we definitely want to get ahead of, to assure business continuity and to protect our properties and communities.”

The Task Force on Climate-Related Financial Disclosures (TCFD) was spearheaded by Michael Bloomberg as a way to systematize reporting of climate risk by companies in order to give investors, lenders, and insurers greater insight into the true risks they face. The organization’s recommendations aim to encourage companies to disclose climate risk as they do other risks, using a similar structure used in financial reporting.

“We provide a framework that lays the foundation,” says Curtis Ravenel, a member of the TCFD secretariat and global head of sustainable business and finance at Bloomberg. “Industry needs to take that framework and begin experimenting with it, start disclosing, and work with investors to determine how to implement TCFD for their specific sector.”

As of May 1, more than 600 organizations worldwide had expressed support for the TCFD’s recommendations. Hannon Armstrong was the first REIT to become a supporter back in 2017, and Kilroy was the first equity REIT to sign on last September. Alexandria Real Estate Equities (NYSE: ARE) and Vornado Realty Trust (NYSE: VRN) have since signed on. The latest report is due in July 2019 and will show an increased amount of climate related disclosure aligned with the TCFD recommendations—and note that companies have a long way to go, Ravenel says.

“The central question we’re asking is, ‘Is your business strategy resilient to plausible future states of climate?’” Ravenel says.

Real estate owners must be prepared for more regulations as municipalities react to climate change concerns. New York, Los Angeles, San Francisco, and Seattle all have either passed or are considering measures.

Los Angeles also announced in late April its own “Green New Deal,” which calls for every building in the city, including houses, to be emissions-free by 2050.

New York’s Climate Mobilization Act, also passed in April, calls for building owners to start reducing emissions in 2024, with a 40% reduction required by 2030. In years past, in various locales, proposed energy-saving rules that would involve costly upgrades and more expensive “clean” energy sources were regularly thwarted. But the political tide has shifted, and REITs need to plan for what it will mean for their portfolios.

“More regulations are coming. It is something that has to be anticipated,” Kilroy’s Sara Neff says.