How the Economic Fallout from COVID-19 Impacted mREITs

In the second half of March, during the first weeks of the COVID-19 financial market response, one of the hardest hit REIT sectors was residential mREITs. Concerns about the effects of the coronavirus on values of financial assets caused investors to shed any type of risk and convert holdings to cash. Extreme interest rate volatility and panic selling followed, prompting lenders to issue margin calls that in turn prompted additional asset sales.

Decisive action by the Federal Reserve in late March calmed the markets, but the speed and severity of this market dislocation hit mortgage investors, including mREITs, particularly hard.

What is striking here is that the residential mREIT sector entered 2020 bolstered by strong balance sheets and portfolios, credit profiles, and lower leverage than many other housing finance entities. Accordingly, the March market turmoil largely represented a liquidity crisis, not a solvency crisis, for mREITs. Nareit Executive Vice President for Research and Investor Outreach John Worth examines the factors behind the downturn and the steps taken to get the sector back on the road to recovery.

Q: From a historical perspective, how does the residential mREIT sector today compare with several years ago?

Residential mREITs reduced their leverage following the 2008-2009 financial crisis, resulting in a healthy and well capitalized financial position. During this period, agency RMBS has dominated U.S. single-family mortgage securitization and mirroring this development, agency RMBS now comprise the preponderance of mREIT sector investments. In 2019, mREITs delivered a return of 17.2% and raised a record $109.36 billion in equity and debt from public capital markets in 2019, nearly double the $55.63 raised in 2018. The leverage levels of residential mREITs have also declined steadily in the last decade. Nareit estimates that as of the end of last year, mREIT investments supported approximately 2.8 million single-family mortgages.

Q: How has mREIT performance been affected by these market conditions?

The chart below demonstrates how mREITs have been affected by the crisis. There was a 52% decline in the total return index between February 28 and March 20th. Subsequent to the announcement of Federal Reserve support for the agency CMBS, the market has improved, rising by 34% through June 30th. 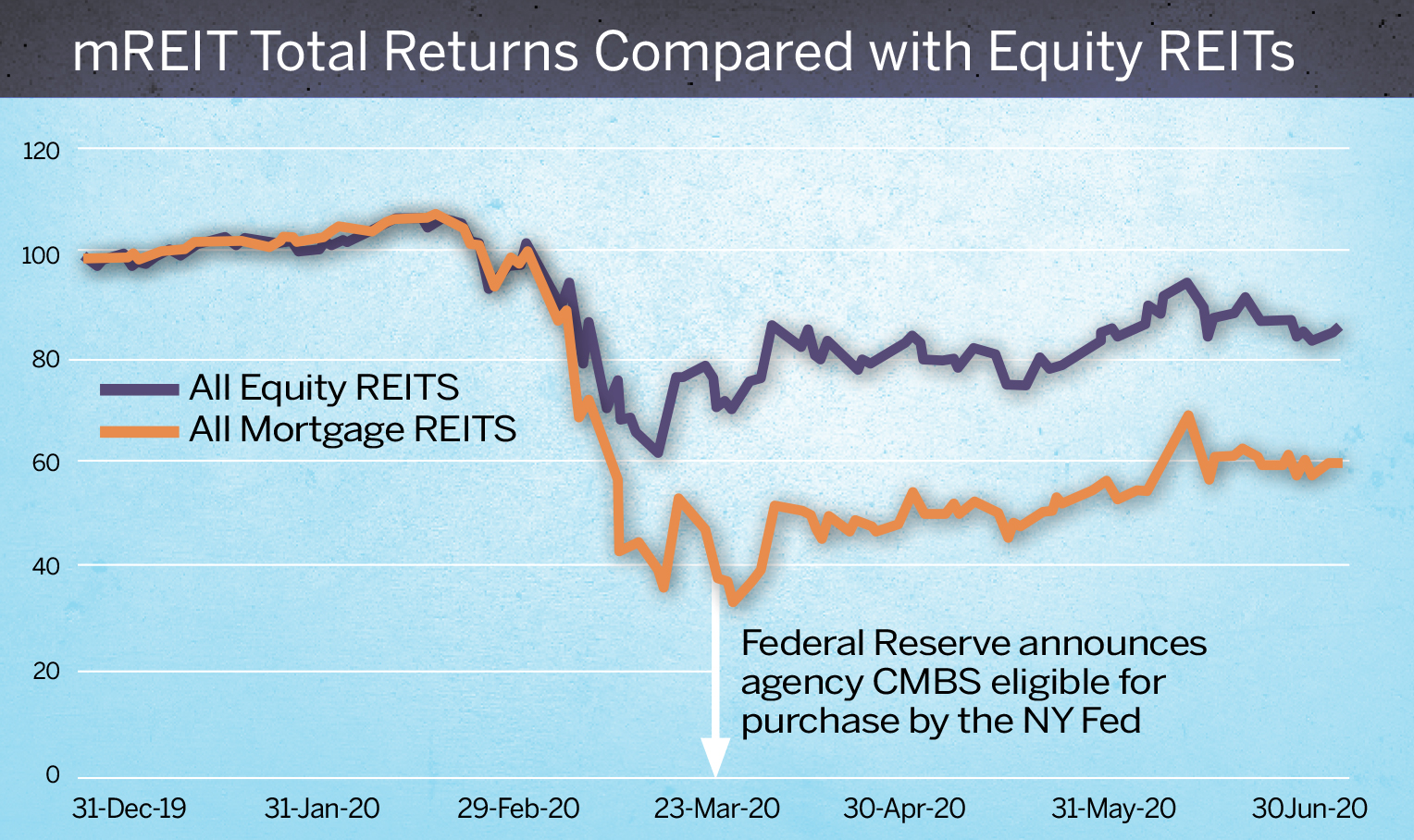 Yes, in fact, the market for agency commercial mortgage backed securities (CMBS) backed by mortgages on multifamily properties was particularly hard hit. Although these securities are fully backed by Fannie Mae and Freddie Mac, the liquidity pressures resulted in what one mREIT CEO described as “extreme” funding pressures. These pressures caused crisis conditions at a number of mREITs

Q: How did this liquidity crisis play out?

mREITs typically use repurchase (repo) agreements, a form of short-term finance, to fund their agency RMBS and CMBS holdings, which allows them to leverage their capital. In early March, repo lenders began refusing to accept agency CMBS (and some other securities) as collateral and requiring large haircuts on the collateral they already held. As these funding issues propagated through the system, margin requirements on outstanding repo agreements increased dramatically, resulting in margin calls on mREITs that were sometimes in excess of their available liquidity.

As this crisis unfolded, Nareit’s Policy and Politics and Research and Investor Outreach teams began an intensive outreach to the Federal Reserve, the Treasury Department, and the Federal Housing Finance Administration (FHFA). Over the course of several days, Nareit conducted a series of meetings connecting policymakers and market participants, including repo dealers and mREITs, to devise a solution to the lack of agency CMBS liquidity.

Q: As an alumnus of the Treasury Department during the financial crisis, did you see any similarities?

While the situation was reminiscent of some of the critical moments during the financial crisis, in this case the assets were federally backed risk-free securities. The coronavirus crisis presented an exogenous shock to bond markets that impacted these securities for reasons unrelated to credit quality. What certainly brought back bad memories of the financial crisis was that the risks inherent in this one market went well beyond the REIT industry. The liquidity driven failure of firms that hold predominantly government backed assets like RMBs and agency CMBS, and the resulting fire sales, would have cascaded through financial markets reducing confidence and resulting in broader losses.

Following intensive outreach by Nareit, and others, on March 23 the Federal Reserve added agency CMBS to its approved list of agency MBS purchases conducted through the Federal Reserve. This action was accompanied by an announcement that the Federal Housing Finance Agency (FHFA) authorized Fannie Mae and Freddie Mac to provide urgently needed liquidity to MBS investors. Together, these announcements stabilized the mREIT market and set the stage for the beginning of mREIT share price recovery.

Q: How has the outlook for mREITs shifted since March?

It has improved considerably. As of June 30, the FTSE Nareit Mortgage REIT index (FNMRTR) has posted a total return of 24% from prior to the Federal Reserve actions. However, certain mREITs continue to grapple with other issues related to the coronavirus crisis.