Uniti Group’s extensive fiber network is expanding the opportunities of broadband access for new areas of the country.

Uniti Group Inc. (Nasdaq: UNIT) is playing a critical role in helping to unite disparate parts of the country virtually by building out its robust fiber network to meet the booming demand for superfast internet access, or broadband.

Fiber, according to Uniti, is the “mission-critical connective tissue” for nearly all current and future broadband delivery. The technology, which transfers data at nearly the speed of light, has helped pave the way for what Uniti president and CEO Kenny Gunderman calls the “virtualization of our culture”—a trend that has accelerated recently with the growing adoption of remote work and learning, telemedicine, and other types of digital platforms.

Little Rock, Arkansas-based Uniti buys and builds fiber networks and leases them on a long-term basis to telecom firms, tech companies, government entities, and other types of tenants. With more than 125,000 route miles of fiber (the actual distance of the fiber conduit) and nearly 7 million strand miles of fiber (the number of fiber strands in the conduit multiplied by the route distance), Uniti’s fiber network spans 40 states.

“What happened during COVID was a reaffirmation of the mission-critical nature of our networks because we didn’t see any disruption in our business,” Gunderman says. “In fact, many of our customers recommitted themselves to the use of our networks to stay connected virtually, and I think we’ll see an acceleration of that in the coming years.”

According to Matthew Dolgin, a Morningstar analyst, internet traffic is growing by about 30% a year, thanks to the widespread adoption of video conferencing and streaming services and advances in artificial intelligence and the Internet of Things, among other trends. “We, as a society, use more and more data all the time, which means that data has to be going through pipes. To me, that’s a good thing for fiber infrastructure companies,” like Uniti, he says.

A former investment banker specializing in telecommunications, Gunderman has been at the helm of Uniti since the company was formed in April 2015 through a spinoff of Windstream Holdings Inc.’s fiber and copper networks. Gunderman says he walked away from a 20-year career in investment banking to run the fledgling REIT because, “as they say in the South, I wanted to eat my own cooking, as opposed to giving advice.”

Right after the spinoff, Windstream—a Little Rock, Arkansas.-based telecom firm serving rural markets—leased its former networks, essentially becoming Uniti’s sole tenant at the time. The sale-leaseback transaction would serve as a template for Uniti’s growth in the ensuing years.

Either way, such a spinoff isn’t likely to be easily replicated, according to Bora Lee, a vice president at RBC Capital Markets.

“As part of the spinoff process, Windstream received an IRS private letter ruling that allowed an OpCo-PropCo spinoff and REIT conversion,” Lee says. “Since then, there’s been legislation and IRS regulations that have largely closed the door on replicating a similar transaction,” she adds.

Uniti’s taxable REIT subsidiary, she says, gives it the flexibility to make acquisitions of companies that otherwise wouldn’t be permissible in the REIT structure. What’s more, the company’s UPREIT structure allows it to use operating partnership units as tax-efficient currency for acquisitions. 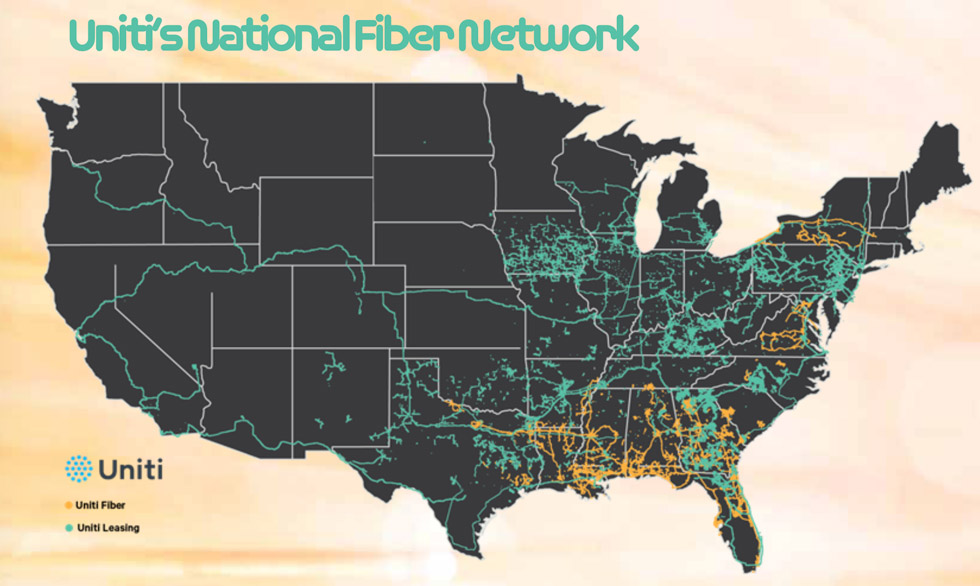 Growth out of the Gate

And, in fact, the company has undertaken a spate of acquisitions over the past six years. Since 2015, it has executed nearly 20 transactions, deploying some $2 billion in the process.

As a result, Uniti now owns the country’s eighth largest fiber network, according to company estimates and the Kagan research group, part of S&P Global Market Intelligence. Mergers and acquisitions (M&A) activity has not only helped grow the company’s fiber network but also diversified its tenant base.

“In the last six years, we went from basically no diversification to about 35% (non-Windstream revenue). So, we’ve moved the needle quite dramatically,” Gunderman says. “We’ve gone from essentially one customer to about 26,000 customer connections. There’s been a tremendous amount of growth in our business and a tremendous amount of growth in the use of fiber,” he says. Gunderman has also leveraged his contacts in the telecom and private equity worlds to help Uniti make acquisitions.

While Uniti has grown largely through acquisitions since its inception, Gunderman says the company has also begun to grow organically by leasing capacity on shared networks to new users.

Of the $1 billion in total contract value in Uniti’s leasing pipeline as of the first quarter of 2021, some 75% of the deals related to fiber acquired as part of the settlement agreement with Windstream, according to Uniti.

“Our strategy is to buy or build fiber all across the country,” Gunderman says. “Generally, these networks have anywhere from 12 to 144 strands per route, which means that you can lease up the networks to dozens and dozens of customers.”

Gunderman says Uniti has “a very simple business,” renting both dark fiber and lit fiber. Dark fiber, according to Uniti, is fiber that has not yet been connected to telecom transmission equipment or optronics and thus hasn’t been activated, or ‘lit.’

“Dark fiber and the access to use fiber to connect to towers and small cells has been one of the fastest-growing parts of our company, given the explosion in wireless broadband,” he says.

Fiber may be an esoteric technology, but it’s hardly new. It dates to the 1970s and, according to some experts, has played a pivotal role in ushering in the information age. A vast undersea network of fiber already stretches around the globe, connecting continents virtually.

In the U.S., many thousands of miles of copper cables have been already replaced with fiber and the process continues, Gunderman says. Fiber, he notes, faces no real challenges from competing technologies. 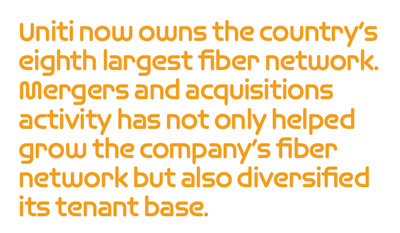 “Fiber, in effect, is glass, but it’s extremely refined,” Gunderman explains. Because of the physics of that glass, there are no physical technologies that are being developed to replace fiber, he says. “Satellite or wireless spectrum are ways to transmit broadband, but because of the physics, they’ll never be able to surpass fiber in terms of speed and latency. It’s just not physically possible.”

Gunderman is equally bullish on Uniti’s growth prospects. He says the company plans to continue to grow its fiber portfolio through development and acquisition and will continue to diversify its leasing revenue mix over the next several years.

“We’re the eighth largest network in the country, and we plan to keep moving up that ranking,” Gunderman says. “Our current diversification (of non-Windstream revenue) is about 35%, and we certainly want to get that well north of 50%. And I think we’ll continue to grow our networks into new markets,” he adds.

Currently, Uniti’s fiber network is largely concentrated in the Eastern United States, and, more specifically, in the Southeast. It has a footprint in some of the country’s largest markets but much of it is in so-called second- and third-tier markets, or what Gunderman calls “non-NFL markets.” And that’s by design.

“We actually have a pretty robust footprint in the bigger markets. But it’s our focus to be first movers in the smaller markets,” Gunderman explains. “A big part of what’s happening in the country today is there’s a major push to get more and more broadband into underserved communities. So, we’re going to continue expanding our network into the inner city and rural areas of the country.”

As it expands its reach, Uniti is helping to narrow the country’s longstanding rural-urban broadband divide.

The disparities between rural and urban markets are largely a function of the high cost of building fiber networks, which are intended to last for more than 50 years, Gunderson explains. To offset the steep costs of development, carriers have traditionally focused on markets with the largest concentrations of potential customers—in other words, the country’s biggest metro areas.

That said, growing demand for and use of bandwidth-intensive devices and applications is helping to bring down costs, making it more economically feasible to extend broadband into rural areas of the country, Gunderman says.

President Biden’s multibillion-dollar infrastructure plan calls for tens of billions of dollars in funding to expand access to broadband. Gunderman says the initiative builds on past federal programs that have successfully subsidized the expansion of broadband in rural communities.

Gunderman is optimistic about the prospects for bipartisan action on extending the nation’s broadband footprint. As a builder and buyer of fiber networks, he also believes Uniti will ultimately benefit from that action, whether directly or indirectly.

“Both parties are in favor of continued investment in broadband. And a big part of these dollars that are being earmarked will be spent on building new fiber networks,” he adds.

Whether they own fiber, towers, or data centers, REITs, Gunderman says, are uniquely positioned to help expand the country’s digital infrastructure.

“The thesis, when we were created, was that our REIT structure would attract REIT investors because of the nature of our business and how comparable it is to the tower sector,” he explains.

Like cell tower REITs, Uniti owns so-called long-lived real estate assets that are leased to third parties, has a high level of recurring revenue (some 95%), and a low level of tenant turnover. The company’s monthly churn rate is less than a half percentage point, Gunderman notes.

“All of these things lead to a highly predictable and supportable cash flow. And that allows us to not only progressively grow our cash flow but to pay a nice steady dividend, which is what REIT investors like,” he says.