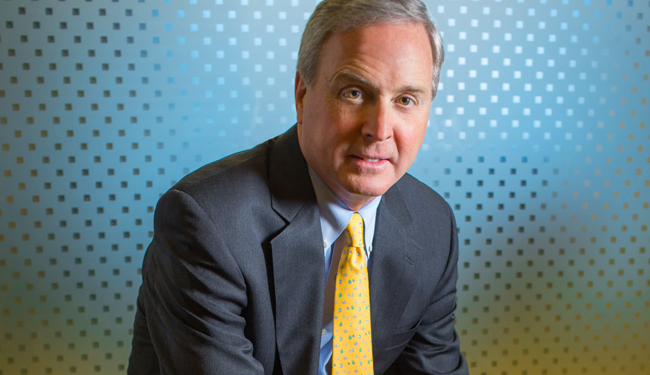 Last April, Roger A. Waesche Jr. took the helm of Corporate Office Properties Trust (NYSE: OFC) in the midst of a strategic plan intended to address, among other things, the fact that the company had come to be viewed by many as a suburban office REIT.

Contrary to that notion, the Columbia, Md.-based REIT, commonly known as COPT, specializes in providing office space to the federal government and defense information-technology contractors.

Waesche, 57, and his predecessor as CEO, Randall M. Griffin, joined COPT as a result of its 1998 merger with the real estate unit of Baltimore Gas and Electric Co. The deal gave COPT, then a suburban office REIT operating in the Mid-Atlantic region, a larger presence in the Baltimore-Washington corridor, which eventually became its biggest market.

Its wide reach there allowed COPT to leverage its expertise in working with the federal government and its relationships with defense contractors to carve out a specialized niche. Today, more than 60 percent of the company’s annualized rents are generated from properties occupied primarily by the government and contractors such as Northrop Grumman Corp., Booz Allen Hamilton Inc. and Computer Sciences Corp. The majority of its office parks are located near or adjacent to so-called knowledge-based defense installations.

Building Around the Government

Over time, COPT has worked to position that focus on catering to government-related tenants into a source of stability in its operations.

“We analyze military bases in the United States to determine whether there is need for the private sector to play a part in the growth or the mission of those bases, along with analyzing the scale of the opportunities and the permanence of base missions,” explains Waesche, who was president of COPT before being appointed CEO as well.

In the decade following the 9/11 terrorist attacks, COPT benefitted from the country’s military build-up, which helped fuel demand for office space near government installations involved in military intelligence. In 2001, the company made its foray into Northern Virginia, home to the Pentagon and associated intelligence agencies. COPT took advantage of softness in that market caused in part by the bursting of the dot-com bubble to make a major acquisition there.

In the years following, COPT also expanded the crown jewel of its portfolio, The National Business Park (NBP) in Annapolis Junction, Md. The business park, situated on about 500 acres adjacent to Fort Meade, has grown from about 900,000 rentable square feet in 2000 to 3.2 million square feet today. Fort Meade is home to the Defense Information Systems Agency, the U.S. Cyber Command and other major defense agencies.

The company’s strong performance and development prospects made it a darling of investors during the post-9/11 period, when the Pentagon’s annual budget more than doubled to $691 billion between 2001 and 2011. Investors were also bullish on the company’s plans to capitalize on anticipated demand for office space resulting from the 2005 round of the Base Realignment and Closure Commission (BRAC).

COPT invested in land near a number of bases expected to grow over time as a result of the relocation of government employees and contractors. Those bases include Redstone Arsenal in Huntsville, Ala., Fort Belvoir in Fairfax County, Va., and Aberdeen Proving Ground in Aberdeen, Md. In 2008, COPT marked its 10th anniversary as a New York Stock Exchange-traded company with an eye-popping 648 percent total return for the previous decade.

“COPT’s business was turbocharged after 9/11 when the defense complex became extraordinarily important, and the defense budget saw a large pickup,” says Anthony Paolone, an analyst with J.P. Morgan.

“The Defense Department is not allowed to compel you to develop something, but if you understand how the system works, you can anticipate demand,” Paolone says. COPT, he adds, “was very good at understanding the game and well-compensated for taking risk. This value accrued to investors.”

During the financial crisis, the company found itself in the enviable position of being perceived by many investors as a safe haven because of its high concentration of government tenants and dominance in the Washington, D.C. region, which held up comparatively well during the recession. While the total return for the office sector, excluding COPT, fell by nearly 50 percent from July 1, 2008, through June 30, 2009, COPT’s total return declined by only 10 percent, according to a report by Green Street Advisors.

But the honeymoon didn’t last indefinitely. Tenant demand for some projects didn’t materialize as quickly as COPT anticipated, and the company’s focus on the federal government, its largest tenant, came to be seen by some investors as a liability in light of federal fiscal problems. The 2011 debt-ceiling showdown and last year’s fiscal-cliff standoff brought the government’s fiscal problems into focus.

What’s more, uncertainty surrounding the outlook for federal spending has caused leasing activity in the area around the District of Columbia to slow. As part of a deal to avert the fiscal cliff, lawmakers delayed action on $110 billion in automatic government spending cuts, known as the sequester, that were due to take effect Jan. 1, 2013.

“Sometimes COPT benefits from the headlines, such as after 9/11, and at times it doesn’t, including recently when episodes surrounding fiscal policy have made defense spending a pawn on the political chess board,” says Michael Knott, an analyst at Green Street.

“During the flush decade of defense build-up after 9/11, we bought and built some assets that, in hindsight, were not the best assets for us to own. Our strategic strength has always been serving tenants in the government and defense IT industries, and the non-defense-related buildings were diluting that differentiating factor,” Waesche explained.

“To many, we were beginning to look like a generic suburban office REIT that happened to own buildings in the Baltimore-Washington, D.C. corridor,” he added.

The company expects to complete its disposition program, on schedule, by the end of this year, if not earlier. When the program is complete, about 67 percent of its annualized rents will come from properties primarily occupied by government tenants and defense IT contractors, up from about 62 percent last September.

The company’s core tenants, says Waesche, generally renew their leases at higher rates and rents than traditional office tenants. COPT expects the occupancy rate for its properties primarily occupied by core tenants to reach nearly 95 percent this year, versus a projected occupancy of just under 90 percent for its other office properties.

In the third quarter last year, the company’s 18.6 million-square-foot portfolio was about 81 percent occupied and nearly 90 percent leased, which represented an increase of 70 and 60 basis points, respectively, from the prior quarter.

“Our core tenants tend to be stickier than traditional office tenants because location is very important to them, and they invest a lot of money in their space, resulting in a high switching cost. Their business is all about collaboration and co-location,” Waesche says.

In addition to shedding non-core assets, COPT is taking a more disciplined approach toward development than it has in the past. It is doing less speculative development by taking on build-to-suit projects for contractors and has sought to do a better job managing risk.

“Prior to launching the Strategic Reallocation Plan, we assessed the merits and risks of each acquisition and development project, but didn’t do a good job of assessing risk in the aggregate. Since 2011, we have had a much more comprehensive approach to managing risk across all disciplines. We intend to maintain this discipline even when times are flush again,” Waesche says.

The company now has about 1 million square feet under development, and its activities are centered on three projects where it sees the most tangible evidence of near-term demand. Those sites include The National Business Park, Redstone Gateway in Huntsville, Ala., and Patriot Ridge in Springfield, Va.

COPT’s Redstone Gateway project is a joint venture formed in 2010 to develop as much as 4.6 million square feet of office and retail space over a 10-year period on a site located at the entrance to the Redstone Arsenal, one of the largest bases in the United States. The arsenal is home to the Army Aviation and Missile Command, the Space and Missile Defense Command and major components of the Defense Intelligence Agency and the Missile Defense Agency. The 2005 BRAC round added some 4,700 military and civilian government workers and embedded contractors at Redstone Arsenal, according to COPT.

The Patriot Ridge project sits on 15 acres in Northern Virginia near Fort Belvoir, which has benefitted more than any other military installation from the last BRAC round, according to COPT. Fort Belvoir is home to numerous defense agencies, including the National Geospatial-Intelligence Agency, which opened its new headquarters there in 2011. NGA is the third-largest of the 17 agencies that make up the U.S. intelligence community, according to COPT. About 6.2 million square feet of space is being added to Fort Belvoir to support some 19,300 personnel relocated to the base under the 2005 BRAC round, according to the company.

After trailing the office sector for some time, COPT’s stock found its footing in the middle of last year thanks to the progress the company has made leasing its development projects, shedding non-strategic assets and chipping away its leverage, according to analysts. In 2012, the company completed more than 1.2 million square feet in development leasing, with about half of that to tenants in its strategic niche.

It took advantage of the rebound in its share price last year to issue equity, raising nearly $205 million in an October offering. It used the proceeds to further reduce leverage, which, in the third quarter of last year, was 45 percent as measured by debt to gross assets.

The company has earned recognition from the Street for its handling of issues within its control. “COPT has gone from a company that was focused on earnings growth in the last decade to one that is focused on growing net asset value per share,” says Brendan C. Maiorana, an analyst with Wells Fargo Securities.

Earlier this year, the company was hoping for a speedy resolution to the lingering uncertainty surrounding federal spending. In March, the federal government is expected to take up the sequester again, and the continuing resolution under which it has been operating expires. The prospect of another debt-ceiling standoff also loomed at the beginning of this year, although Congress passed a nearly four-month extension of the debt limit, to May 19.

Waesche says he expects the federal government to cut defense spending, but not to the tune of the $50 billion annually outlined in the sequester. COPT, he says, is well-positioned to withstand likely spending cuts because of its focus on military installations involved in the high-tech segment of defense, an area that isn’t expected to lose much funding.

Continued occupancy gains resulting from the implementation of the 2005 BRAC round are also expected to blunt the effects of any defense spending cuts. Government employees were relocated by the fall of 2011, but the so-called “contractor tail” continues, explains Waesche. Recent improvements in the housing market should make it easier for contractors to relocate their employees, he said. Contractors themselves will become more willing to commit to new space once there is greater clarity on the issue of federal spending.

“We think that even if the defense budget is cut, our business will hold up well overall because it is tied to priority programs like cyber security, for which funding isn’t likely to go down, and because of the contractor tail from BRAC,” Waesche says.